The future of PCB designers isn’t just on the minds of those in the trenches; it’s also becoming part of the discussion at CAD vendor user group conferences.

Such was the case last week, when a major OEM picked Zuken Innovation World to focus on an important present-day industry theme:  Who will replace the many designers who are nearing retirement?

Jennifer Waskow of Rockwell Collins said she “[doesn’t] have the answer,” but after listening to the printed circuit design manager’s joint presentation (with Rockwell Collins manager of technical support and Lean Robert Bagsby), perhaps she may be onto a solution after all.

To show how technology has changed over the years, the Rockwell Collins presenters shared photos of Boeing cockpits. A 1949 Boeing airplane took multiple people to fly: a navigator, flight engineer, pilot and co-pilot. By comparison, today’s Boeing 767, which uses Rockwell Collins’ LCD displays, is a “consolidated, integrated management system” that really only needs a pilot. “The co-pilot is there just in case,” Waskow said.

Similarly, EDA tools in the 1980s required multiple roles, while now the technology is “evolving into a suite of tools that is product-centric,” thereby “colliding previous roles into one or two individuals.”

According to PRINTED CIRCUIT DESIGN AND FAB’s 2014 designers’ salary survey, said Waskow, 71% of designers had more than 15 years’ experience in 2014, and 45% had more than 25 years under their belts. Plus, over half the designer talent in the market is over age 50.

“We’re all on a safe trajectory until we run out of fuel,” Waskow said, and “the role of the designer is nearing running out of fuel. We need to prepare for attrition.”

So, who will these one or two individuals be when the veteran generation retires?

Waskow followed job boards between September 2014 and March 2015 and found a 50/50 split between jobs for designers and engineers. Also, “100% of employers” are looking for professionals who are trained and have four to eight years of experience.

Waskow noted employers want designers with four plus years in the bachelor’s of electrical engineering domain; eight-plus years in AS, and 10 years in GED.

If no employer is looking for entry-level designers, how do designers get experience?

Because of Waskow’s research, she started seeking new talent 18 months ago. What she has found is that academic programs aren’t teaching board layout. So Waskow has set about recruiting for this career, despite the difficulties of getting new designers to move to the Midwest, which she said, “isn’t easy.”

But she’s determined. She cold-calls deans of colleges she finds through Google searches. Mostly she has reached out to local educators, and has found three schools in particular that can help: University of Northern Iowa, which is a “teaching school” that offers a bachelor’s in electrical engineering technology, and Hawkeye Tech  and Kirkwood University, which both have associate’s degrees in electrical design.

Rockwell Collins, she said, is trying to partner with these schools to establish a curriculum. They are “having a conversation to figure out what tools make sense so there is less of a learning curve on the job.”

From the schools’ perspective, the issue is offering courses that meet a longer-term need. Waskow said the biggest concern educators have is about demand: “Where’s the demand for the curriculum for the next class and the class after that?”

This is not just a Rockwell problem, Waskow admits. “The person driving the plane has to react to significantly more information.”

To cope, Waskow is pushing for relevant learning to take place outside the classroom environment. Rockwell Collins is working toward establishing programs where students can receive college credit for learning on the job. Waskow is also conducting what she calls “high school outreach” to attract prospects while they are young.

Other companies would do well to follow her lead.

Waskow’s presentation was one of many customer-driven sessions over the three-day event.  Zuken Innovation World, a user and technology conference, had record attendance at its San Diego location, said CEO and GM Kent McLeroth, Zuken USA. Also, it marked the first time more presentations were from partners and customers than from Zuken, McLeroth added.

A theme of Zuken Innovation World was the move toward a “more integrated engineering flow,” a term first mentioned by McLeroth early in the week.

One of the ways in which designers are addressing this trend toward system-level engineering is through use of Zuken’s CR-8000 design software, which was recently updated.

Craig Armenti, Zuken applications engineer, said, “Multi-board is a unique feature of CR-8000 that permits the coordinated design of more than one board for a single product.”

The product “has hierarchal database management,” said Anup Keval, senior staff engineer, Qualcomm Technologies. Designers “can see in real-time what’s going on with a 3D image – all in one view. It provides a design editing environment in 3D visualization.”

The buzzword of the week, “integrated,” came up in Keval’s presentation as well. “The current methodology must change,” he said. “There’s a wall between the IC, package, and PCB design teams.” He suggested, “Ideally, [we need] something more integrated to look at all domains at once.” This, he said, “will take some time” and may require a “hybrid solution: both segregated and integrated.”

“The reality is we’re always pushing the envelope of technology, trying to predict the environment you’re going to work in,” said Eldon Staggs, technical manager, ANSYS, in his presentation on minimizing EMI.

“We are going to have a lot more engineers in different disciplines working closely with other engineers,” Bill Martin, president and VP of engineering, E-System Design, added.

There is “much more advanced packaging than ever,” said McLeroth. “Faster, smaller, cheaper, better, and sooner – everything is connected.” 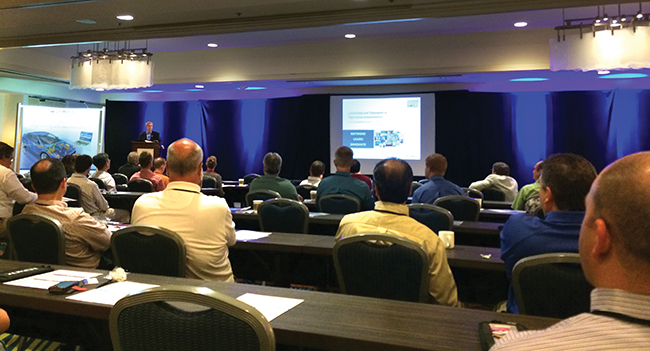