Fresh Faces in the Design Community

The annual PCD&F Salary Survey reveals that while more than a quarter of designers are nearing retirement, newcomers might finally be filling the gap.

We’ve been talking about the graying of the design community for so long, it’s almost hard to contemplate that the day will inevitably come when newcomers start filling the ranks.

While responses to this year’s PCD&F Designers’ Salary Survey generally paint a similar picture as 2013, there are some notable differences. Yes, the veteran design population is still growing, with more than a quarter of designers nearing retirement. But designers with five years of experience or fewer grew about five percentage points compared to last year. (Evidence of newcomers is also reflected by the higher percentage of respondents in the lower pay ranges.)

Other results of the recent survey indicate more annual bonuses are being doled out, and a rise in smaller firms.

Some sharp contrasts are emerging between Western employers and those in Asia. The West offers superior salaries, better access to third-party training, and richer health and retirement plans, among other benefits. Interestingly, outsourcing is becoming less of a concern, eclipsed by concerns about technology challenges. Perhaps this is because respondents in Asia are less concerned about losing their jobs to lower-cost nations than their colleagues in the West.

For the month of August, PCD&F conducted a global survey of bare board designers, managers and design engineers, receiving a total 428 qualified responses. Data compiled included salaries, job functions, titles, project types and quantity, benefits, education, years of experience, career challenges, locations, ages, and end markets, to name a few. Results are intended to provide a glimpse of the state of the design industry, rather than a thorough scientific study.

Of the 428 respondents, the overwhelming majority (74%) identified themselves as PCB designers. Another 8% were design managers, 1.4% CAD librarians and the rest engineers (TABLE 1). In 2013, designers accounted for 67% of respondents, but there was the same percentage of design managers. Not surprisingly, then, this year more than 78% indicated their principal job function includes schematic, layout and placement. Another 6% are primarily involved in signal integrity, hardware or software engineering, and more than 10% are in design or engineering management. Less than 1% perform drafting. 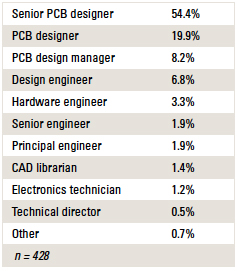 More than a quarter of designers who took this year’s survey said they have more than 30 years of experience in the industry (28%) (TABLE 2). Those who have five or fewer years of experience represent some 12% of the design community, up about five points from last year. (Note: While comparisons are made to the 2013 survey, the subject sampling was random; therefore, there may be some statistical variation in the responses.) 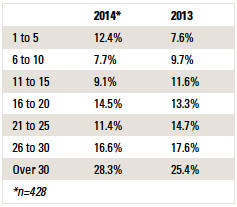 Survey participants predominantly live in the US (67%), but most areas of the world are represented, particularly Central/Western Europe, China, and Canada (FIGURE 1). 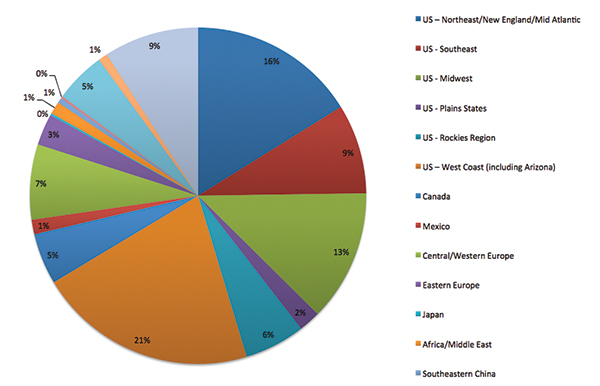 The picture of which types of products and/or technologies designers directly engineer, design or layout mirrors that of the prior year’s survey results, with four to six layers and double-sided PCBs essentially tied, followed by seven to 10 layers, and BGAs (TABLE 3). More than 60% work on 12-plus layer PCBs. Single-sided remains surprisingly tenacious, more common than rigid-flex, microvias/HDI or RF/microwave technologies. 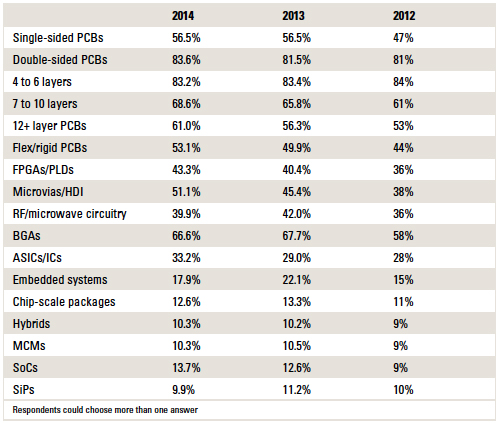 The hard work of designers is reflected in their salaries, with nearly half of those who responded bringing in more than $80,000 annually (in US dollars) (TABLE 4). Almost 70% make more than $60,000 each year. One noticeable difference was the number of designers making less than $10,000, which came in at about 8%, up from roughly 2% last year. That difference reflects the higher number of respondents from China and Southeast Asia, where more than half reported salaries of $15,000 or less. 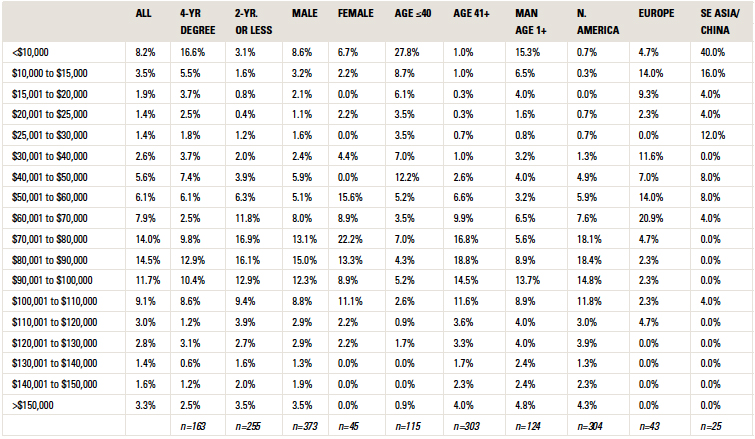 More industry respondents said they received an annual bonus this year than last: 52% compared to 45%. Nearly a quarter of those who received a bonus said it was more than 7% of their annual salary, while 51% said it was 1 to 3% of their salary.

Designers aren’t leaving their jobs, with 93% responding they have the same position as they did a year ago, but 8% said they were laid off in the past 12 months.

The majority of participants have attended college and either received an associate’s degree or no degree (56%). Another 26% have a degree in an engineering or related field, and some 9% have a graduate-level degree (master’s or PhD in any field).

Designers who have a four-year degree were asked in which subject they completed their degree, a new question on the survey. It is no surprise, as evidenced by FIGURE 2, that electrical engineering came out on top, with 65% of responses; other engineering degrees accounted for about 13%. “Other” received more responses than any other non-engineering-related degree (14%). 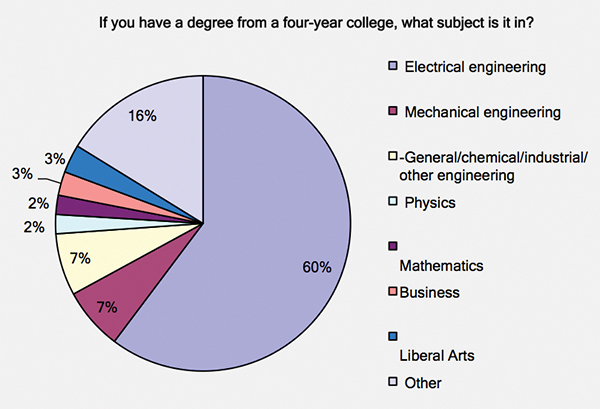 Based on a comparison of PCB designers’ responses in 2014 and 2013, IPC certification is becoming more popular. IPC certified designers accounted for 36% of survey participants this time around, up about four percentage points year-over-year. About 44% of those who have been certified have also received the CID+ designation. In North America, 41% of respondents indicated they are certified.

The biggest challenges in 2014, according to respondents, are technology (40%) and workload (50%). Designers appear to be less concerned than last year about finding and keeping a job (33%). The threat of outsourcing concerns 20% of those who took the survey.

Military/aerospace is still the most prevalent end-market for which designers design (19%), down about four percentage points compared to 2013. Communication/related systems equipment (includes all phone types) came in second, with 17%. Industrial controls/equipment/robotics garnered 15% of responses, and consumer electronics received 10% of responses. All other end-markets were below 10% each.

Of the products and service purchases designers evaluate, recommend, specify, or approve, CAD software led the pack at 84%, up from 79% last year (TABLE 5). One-fourth are involved in procuring CAM tools. Prototype PCB services came in at 50%, showing once again the integral role a designer plays in product development. Nearly one-fourth also specify the EMS shop, and more than one-fifth are involved in selecting the production PCB fabricator. 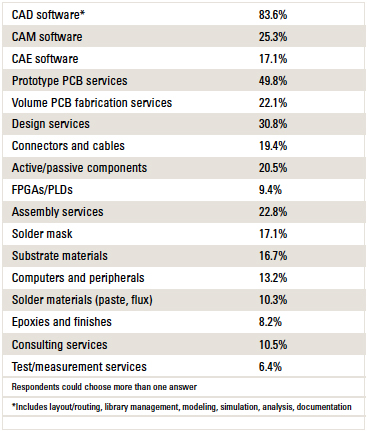 Another 34% can either specify or evaluate products, compared to 41% in 2013, and 12% approve purchases. Some 17% said they have no level of purchasing power.

Staff sizes may still be on the larger side, with 36% of designers working with more than 1,000 colleagues in their firms, but that number is 5% lower than 2013. On the opposite end of the spectrum, 11% of designers said they work for small firms with 9 or fewer employees, up from 8% last year.

Designing is a remarkably independent venture. When asked how many designers manage others, 71% said “none.” Another 24% said one to five people work for them directly.

More than a quarter of respondents’ companies pull in more than a billion in annual revenues, with 15% of that figure making $5 billion or more. Some 30% of firms post annual revenues of less than $50 million, including 15% under $5 million.

Health (82%) and dental (68%) insurance are both still offered at the majority of firms, but responses fell below those of last year (85% and 72%, respectively). That’s a byproduct of the broader geographic response. In North America, 95% of respondents’ employers offer health insurance and 90% provide dental.

Companies offering 401(k) plans fell from 66% to 61%, and life insurance dropped from 71% in 2013 to 62% this year. Again, these variances are tied to the increase of offshore respondents. Life insurance is offered at 77% of North American firms, and 91% of the US-based designers have access to a 401(k) plan.

The option for telecommuting appears to be rising, with 25% of responses, up five points year-over-year. Americans lead the way, with nearly one-third provided the option of working at home.

This last trend may become problematic. While flexible working arrangements are a huge trend and can contribute mightily to quality of life, there are drawbacks. Designers have spent decades fighting for recognition from their peers in the electronics world. Having a physical presence is an added advantage for those who argue that their roles cannot be easily duplicated offshore. And as the graybeards begin to exit stage left, the sharing of their priceless knowledge and mentoring skills could be undermined if the person who is taking over the seat is 5,000 miles away.

Chelsey Drysdale is senior editor of PCD&F/CIRCUITS ASSEMBLY; This email address is being protected from spambots. You need JavaScript enabled to view it..

Below are the rest of the data compiled this year. Thank you to all who participated in this annual survey. If you have any comments, questions, or suggestions for the 2015 survey, please contact us. 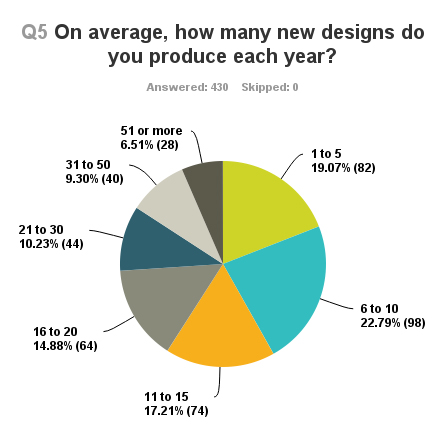 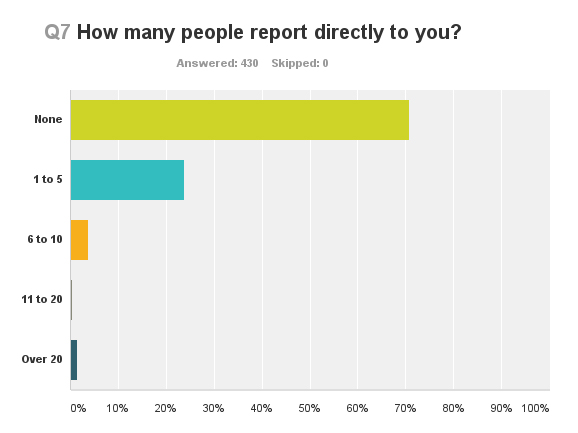 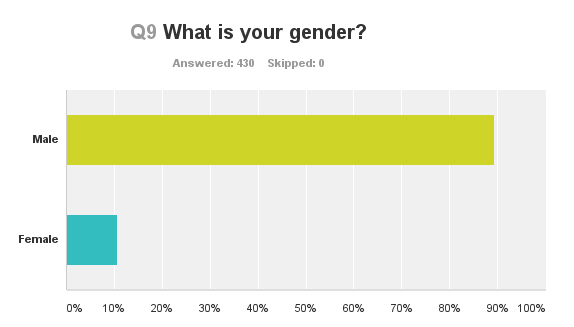 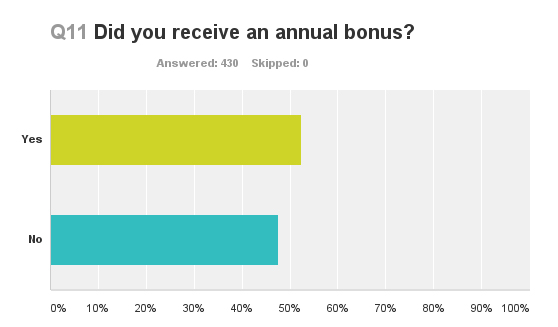 FIGURE 6. Percentage of respondents who receive an annual bonus. 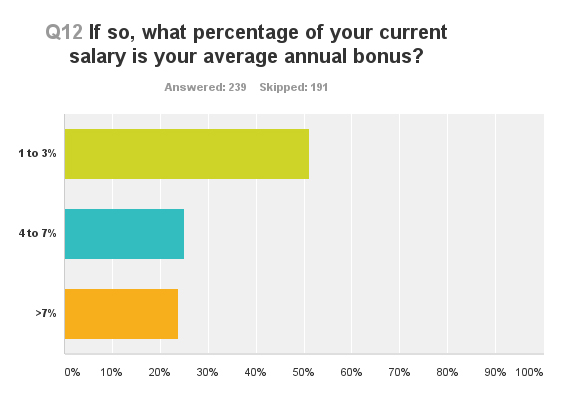 FIGURE 7. Respondents who receive a bonus and the bonus amount relative to their annual salary. 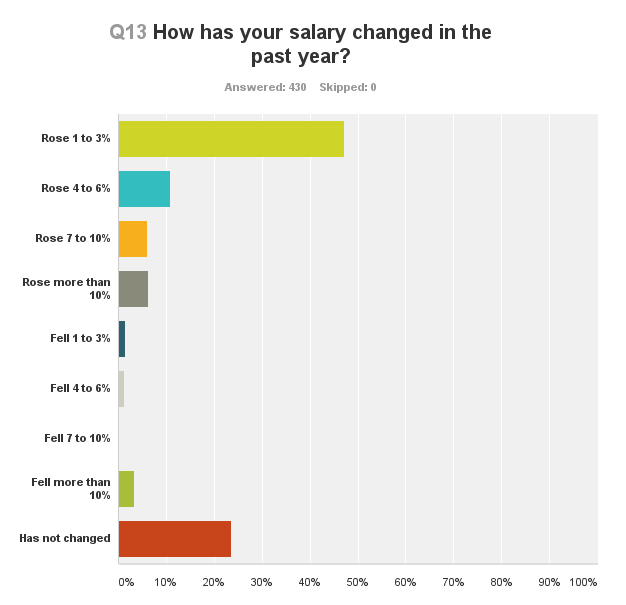 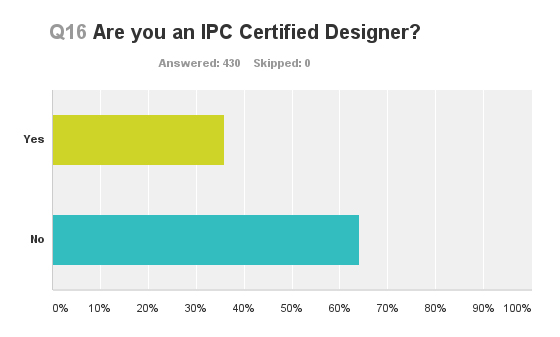 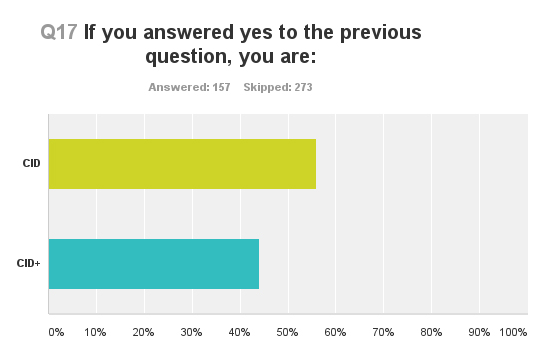 Figure 11. Percentage of those respondents who are IPC certified, by certification type. 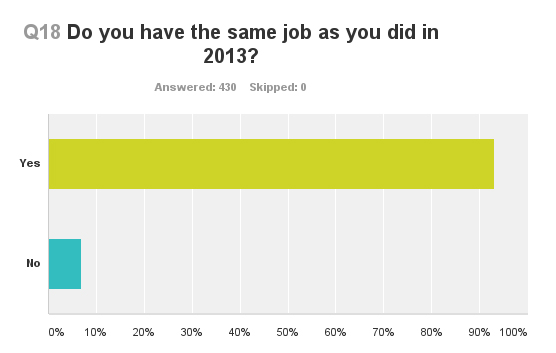 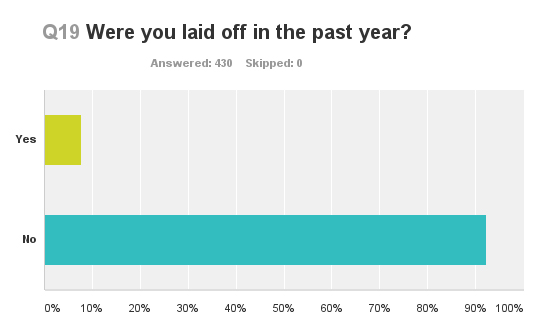 Figure 13. Percentage of respondents who were laid off in the past year. 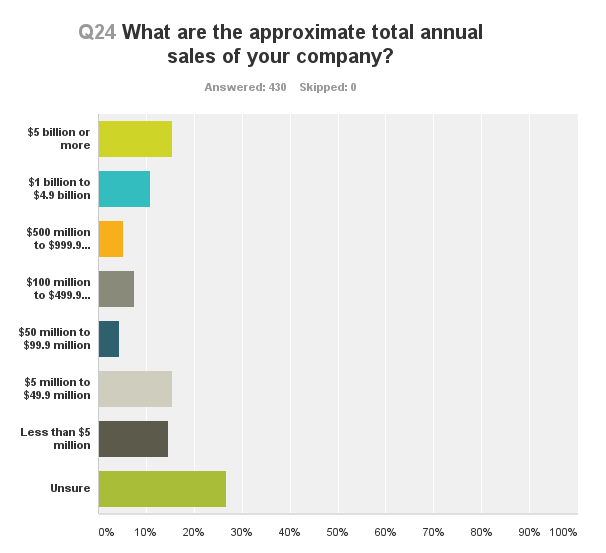 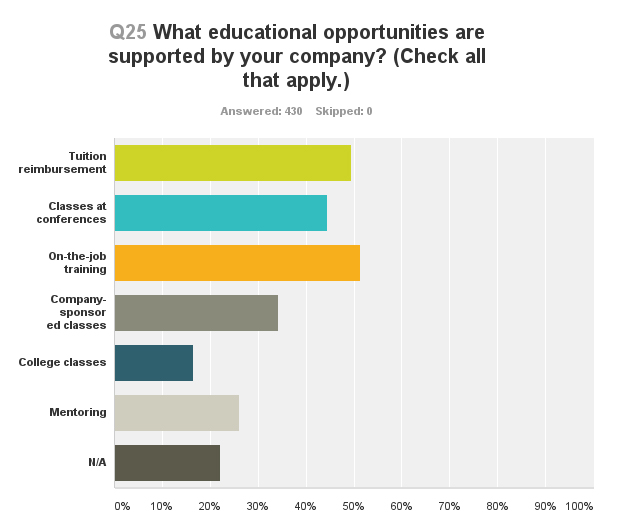 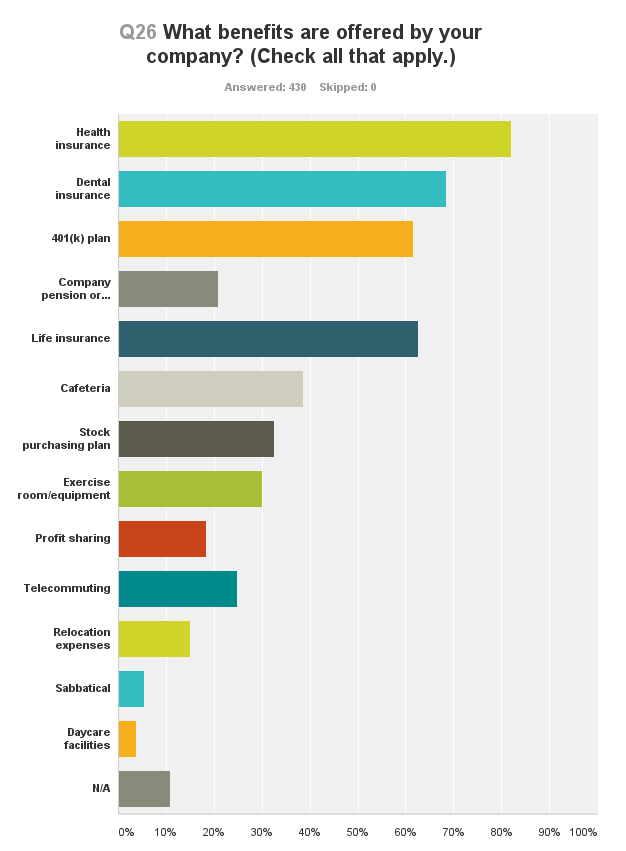 Table 6. What is your current age? 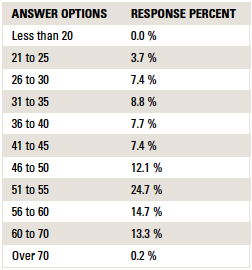 Table 7. For which end-market do you primarily design? 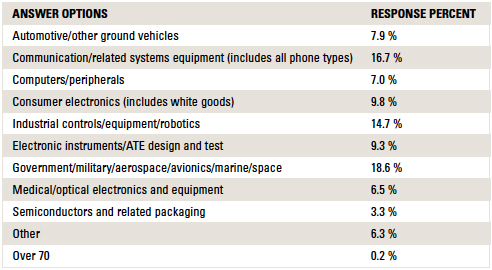 Table 8. If you have a degree from a four-year college, what subject is it in?

Table 9. What is your highest level of purchase power?

Table 10. What do you think will be the biggest challenge(s) you will face as a designer in 2014? (Check all that apply.)

Table 11. How many staff members does your company employ? 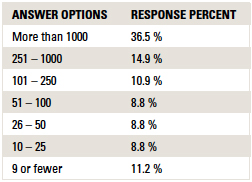 Table 12. What is your principal job function?