Major EMS players continue to nose their way into the traditional OEM space. Can it last?

Foxconn didn’t collapse under its own weight. The PC slowdown didn’t take out any major players, despite shipments falling five straight quarters for the first time in history. Acquisitions were strategic, not outlandish. (To wit: Airbus floated its billion-dollar defense electronics business and no one bit.) Assemblers expanded from China but didn’t leave China.

Compared to 30 years ago, the changes are startling. Production value overall has risen 78% from $1.05 trillion. China’s share of world production in 1995 was a meager 2.6%. Meanwhile, the share controlled by mature geographies has fallen to 31% from 75% in 1995.

EMS revenue rose 3% last year to $273 billion, a new record. What’s never clear is how much double- and triple-counting is included in the data. Take, for instance, an Intel Core i7 microprocessor. Depending on clock speed, it may retail around $400. Intel sells the assembled part to a distributor, which in turn sells it to an EMS.
The EMS attaches it to a board and sells the finished assembly to an OEM, which sells it to me and you. Once the revenue of the packaging house, the wafer fab, the distributor, the EMS and the OEM are all considered, the value attributed to that single part could be several times its actual retail value.

The 2015 EMS story lines were subtle, but they were there. Most remarkable, perhaps, is how mature the industry is behaving. Sensible, methodical approaches may not be sexy, but they tend to work.

Some trends did resonate in 2015. Several companies began or continued broadening their reach. Automotive drove 85% of no. 27 Kimball’s sales in the late 2000s. The company is now looking to diversify through gains in medical and industrial. No. 39 éolane landed more than 90 new customers in 2015, many of which were outside its traditional French borders as its domestic customers were slammed by the oil market downturn. France’s industry has been in decline for 30 years, said Paul Raguin, president of the éolane executive committee, and the EMS has expanded its “hunting ground” to Northern Europe, China, India and Maghreb. Through relationships with Fitbit, Jawbone and OMsignal, no. 5 Flex has built its wearables unit into a $1 billion business.

Major Taiwanese ODMs, including Quanta (3), Compal (4) and Wistron (6), are attempting to reduce their dependence on the low-margin PC business. Wistron and Compal are driving at IoT, and Compal also has set up medical R&D centers. Quanta, which is building the Apple Watch, saw its QCT (Quanta Cloud Technology) subsidiary launch an open source platform for building, running and scaling container-based enterprise applications. To some extent, they are realizing what Flex did years ago, when it ditched what was an $8 billion PC business in favor of higher-margin medical, defense and other markets considered non-traditional for volume contract assemblers. The shift to mobile makes sense in terms of leveraging existing technical knowledge and supply chains, but how soon until handsets become the new PCs when it comes to high volumes but low margins?

Going against the grain is Videoton (36), which is in deep with automotive. The strategy paid off last year as revenue was up 13% to a record high. No. 10 BYD, the biggest percentage gainer in terms of organic growth over 2014, gets more than 70% of its business from three major customers: Samsung, Motorola and Nokia.

In general, M&A activity was slower versus 2015, but included some notable deals. There were roughly 30 EMS transactions, down from 50 a year ago. More than a dozen shops closed.

There were two major acquisitions among the Top 50 in 2015. The first involved Natel Engineering and OnCore Manufacturing, which merged in April, becoming the largest privately held EMS in North America. Shortly thereafter, the firm was renamed Neo Technology Solutions, a nod to the three entities from which the merged company came. Neo Tech (29), which had a stated goal of reaching $1 billion in revenue, seems primed to blow past that figure.

In Europe, Scanfil (44) merged with PartnerTech, nearly doubling the size of what is now Scandinavia’s largest EMS. The merged company has 16 plants in nine countries across three continents.

No. 47 Ducommun LaBarge went the other way, shedding three EMS sites (and dropping $80 million in annual revenue with them).

Regional expansion. About 20 new facilities made their debuts in 2015, the largest of which was Flex’s 530,000 medical manufacturing plant in Tijuana, Mexico.
Expansion did take place, but in a targeted fashion. Any such conversation must, of course, start with India. The world’s largest democracy has made a point of reversing its longstanding position as a net importer of electronics. To encourage outside investment, the nation has set up special economic zones (SEZ) and domestic tariff areas (DTA), which come with varying changes to custom and duty laws.

As part of its new “Make in India” initiative, lawmakers are considering mandating its defense, space and atomic energy sectors use homegrown chips. Several major OEMs are ramping activities there, and the supply chain is certain to follow.

Among those in the Top 50 that expanded in India last year was no. 1 Foxconn, which pledged to invest $5 billion in new R&D and volume manufacturing facilities over the next five years. Flex employs 10,000 people in India, and over the next 12 months the firm plans to hire another 3,000 to 4,000. It has a total of 645,000 sq. ft. at its Sriperumbudur factory alone, where it builds smartphones for Lenovo, among others. Wistron and Optiemus Infracom, founders of Zen Mobile, are opening a $200 million, 16-line smartphone JV in Noida. Jabil Circuit (7), the largest EMS operating in India, has more than 1.4 million sq. ft. of plant space across multiple sites.

India doesn’t yet have an indigenous company on the Circuits Assembly Top 50, but Dixon Technologies and SFO Technologies are each at or above $200 million in sales and have the wind at their backs.

Expansion is rampant elsewhere in the region too. Jabil signed an MOU to extend its campus in the Saigon Hi-Tech Park in Vietnam to up to one million sq. ft.
Groundbreaking is slated for next year, and Jabil could double its current 2,600 workforce when the new site is fully operational. Inventec (8) opened a site in Chennai, and Compal is investing in New Delhi.

In nearby Thailand, Fabrinet (26) has begun construction on a 550,000 sq. ft. building, the centerpiece of a new campus outside Bangkok. And Cal-Comp (14) expanded to the Philippines.

Curiously, there was little to speak of in China, as companies shied away due to rapidly increasing labor costs and government protectionism, which is seen as increasingly hostile to foreign investors. Foxconn is expanding there – surprise! – and state-owned Shenzhen Kaifa Technology (17) opened a plant in Dongguan, but other Top 50 companies are taking a more flexible approach.

For the most part, the EMS companies are simply following the OEMs. Most major branded smartphone companies are operating in India now (Nokia, Huawei, Lenovo, Xiaomi, Oppo, etc.), and a joint Apple-Foxconn project has been rumored as well.

Mitsubishi has made a small ($8 million) investment in a temperature control equipment plant in Laos. There it will join Denso, which also has operations in Singapore, Indonesia, Malaysia, the Philippines, Thailand and Vietnam.

The bloom is well off the rose in China. But could entrenched corruption and political unrest in Thailand, Malaysia and elsewhere in the region quell the rise of Southeast Asia?

The new OEMs. EMS’s continue to push into products and services outside traditional SMT assembly.

Cal-Comp invested 491 million baht for a nearly 10% stake in Dawning Leading Technology, a Taiwanese semiconductor assembly and testing company,  for the purpose of gaining technological know-how in IC manufacturing.

Others concentrated on OEM deals. Jabil snapped up advanced optical systems designer Kasalis. Flex bought Mirror Controls International, NEXtracker and Wink.
Benchmark nabbed Secure Communications Systems, a provider of ruggedized PCs. (As we know now, Foxconn will top them all with its recent buyout of Sharp.)

EMS is growing as an industry, but not fast enough to keep shareholders happy. With global competitiveness at an all-time high, look for EMS companies to accelerate their acquisitions of OEMs whom they see as strategic to a particular end-market they are pursuing.

Rank order. Each year we learn more about some of the private companies and update our rankings to reflect that new data. We have overstated, for instance, Beyonics’ revenue, which is in the neighborhood of $300 million, considerably lower than the $550 million we had estimated in 2014. It falls from the list.

Making the CIRCUITS ASSEMBLY Top 50 for the first time is Shenzhen Kaifa. A publicly traded subsidiary of state-owned Great Wall Computer, we had previously excluded Kaifa due to a lack of transparency into its actual revenues. Its Huizhou plant built over 100 million mobile phones in 2015, with Huawei a major customer,
and it teamed with IBM on a $50 million smart meter program. It clearly belongs.

(If this speaks to how convoluted tracing ownership is in China, Great Wall owns stakes in PC Partner, TPV Technology and Zhongyuan Electronics Group. But Great Wall itself has a parent company: none other than China Electronics Corp., an arm of the Chinese government. Given how opaque Chinese business reporting is, it’s difficult to have complete confidence in the data provided.)

Exchange rates used were those on April 21 (TABLE 1). Some companies were helped by currency changes. Japanese firms, for instance, were boosted by a yen that fell 8.4% against the dollar over the past year. The Thai baht and the Malaysian ringgit rose 7% and 8%, respectively, in that same time frame. The Taiwan dollar was up 3.5%. 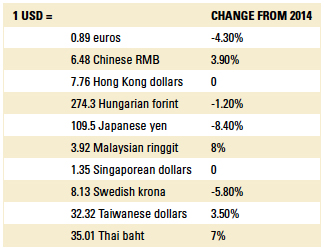 The euro, on the other hand, fell more than 4%, while other currencies represented on the Top 50 held more or less steady.

Revenues shown are based on calendar 2015 unless otherwise noted. Corporate growth rates were tabulated in the local currency, then converted to US dollars, in order to correct for currency swings. About half the Top 50 grew in 2015, and four others were basically flat. The biggest percentage gainer was BYD (thanks, Samsung!). Pegatron was the largest in pure revenue terms, adding nearly $5 billion on the strength of the Apple iPhone 6.

In compiling our rankings (TABLE 2) we include ODMs such as Quanta and Wistron because no matter what label one assigns to them, they design and build electronics products for other companies. On the other hand, we omitted PKC, which does almost $1 billion in revenue, but most of it comes from wiring harnesses; less than 10% is from direct EMS work. Likewise, Kaga Electronics has huge revenues as well, but most are from its component distribution business. 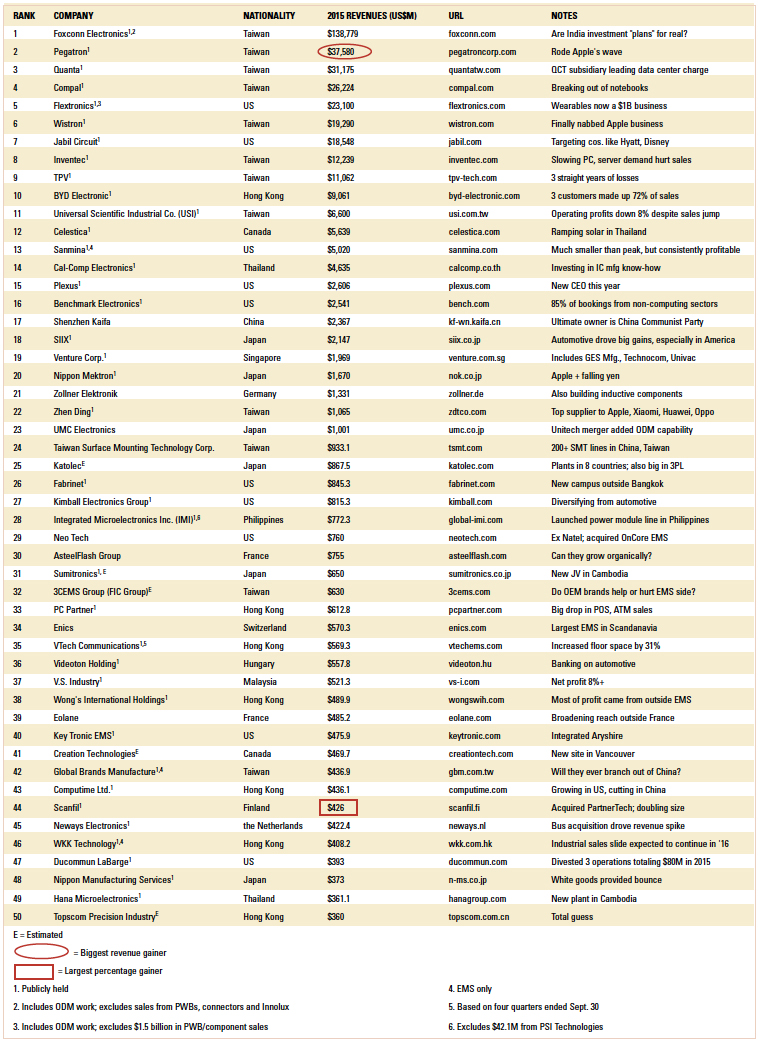 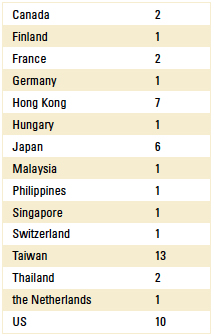 We include the major flex circuit makers such as Zhen Ding and Nippon Mektron, calculating their flex assembly value based on the generally accepted figure of 40% of their overall revenue.

As always, any errors are those of the author.