When optimizing board area when considering thermal effects, the IPC charts aren’t enough.

Prior to 2009 board designers concerned about PCB trace temperatures really had only one tool available to them. That tool started out as a poorly controlled, “tentative” set of curves created by two employees of the National Bureau of Standards in 1956 (Note 1). Those curves were redrawn and republished until they finally appeared in a military standard1 and ultimately in an IPC standard2. Board designers have been using them (and various calculators and Web pages based on them) ever since.

Finally, in 2009 IPC published a new standard, IPC-2152, Standard for Determining Current Carrying Capacity in Printed Board Design.3 This is arguably the first, best-researched, well-controlled, most complete investigation into trace current and temperatures in the history of our industry. It is over 90 pages long and contains over 75 charts and tables. There are only two problems with the standard: it is bulky and awkward to use, and the problem of trace currents and
temperatures is too complicated to be able to distill into a collection of charts.

In this article we cover the basic background information needed to understand why traces heat up with current, convert the chart data into sets of equations, evaluate the charts and the equations using a thermal simulation model, and look at the sensitivity of the trace and formula results to other factors (such as adjacent traces and planes, different materials, etc.) (Note 2). The overriding conclusion of this article is that optimizing board area when considering thermal effects does not seem to be possible without the use of sophisticated thermal simulation software.

α = thermal coefficient of
resistivity (0.0039/˚C), and
ΔT  = the change in temperature
from the reference
temperature.

Eq. 3 is the form whereby we can calculate the temperature change of a conductor if we know the resistance of the conductor at the ambient temperature and at some elevated temperature.

When we pass a current (I) through a trace on a PCB, there is power dissipated in the trace given by the relationship I2R. This power dissipation heats the trace. At the same time, the trace cools by conduction into the board material, convection into the air surrounding the trace, and by radiation away from the trace. A stable temperature is reached when the I2R heating effect just equals the cooling effect. So we can speculate that the temperature change follows the relationship shown in Eq. 4, where w = width of the trace and Th = trace thickness (so w+Th is proportional to the surface area).

A typical IPC curve from IPC-2152 is shown in FIGURE 1. It has cross-sectional area (in square mils) along the horizontal axis and current along the vertical axis. Then individual curves are provided for various changes in temperature. 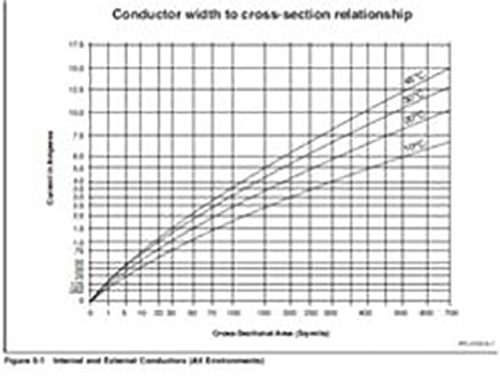 We preferred working with curves which had current along the horizontal axis and the change in temperature on the vertical axis. This is more consistent with Eq. 4. So we converted a variety of curves in IPC-2152 to this orientation. We did that with the aid of a digitizing program (Note 3). We then fit equations to the resulting curves. A typical result for 2 oz. curves is shown in FIGURE 2. 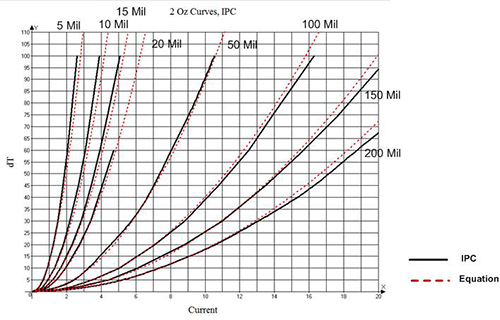 The IPC data are shown as the black curves in the figure, and our fitted equation (Eq. 5) is shown in each of the dotted red curves. Although not shown in this article, the curves and Eq. 5 matched equally well for all external trace sizes and currents. We believe an equation like Eq. 5 is much easier to deal with than are a large set of curves.

IPC-2152 also provides data for internal traces and traces in a vacuum. Perhaps the most surprising result in the standard is that internal traces actually run cooler than do external traces! This is a major change from the previous standard. The traces run cooler because the dielectric materials conduct heat away from the trace better than does the air.

Following the procedure above, we converted the internal and vacuum data to the format shown in Figure 2 and developed equations for those curves. The resulting equations are summarized in Appendix 1. The resulting equations are not as straightforward as Eq. 5, having different coefficients for some different trace widths. This can pose a problem when trying to design high-current traces on internal layers or in a vacuum, but the equations can, in fact, be pretty easily handled by calculators with appropriate programming (Note 5). In the cases where the formulas are different within a trace thickness, the differences are small and probably reflect errors, uncertainties and variations as a result of various graphical drawings and manipulations.

We used a computer thermal simulation software tool (Note 6) to validate the IPC curves by modeling the IPC test board used for collecting the IPC data. The configuration of the test board used for the IPC testing is freely downloadable from IPC (Note 7). FIGURE 3 shows one of the images produced by the simulation and provides a good illustration of what the test board looks like. This particular simulation was of a 2 oz., 200 mils wide trace with 12A of current applied. The entire trace is 12" long with “sense” probes 3" in from each side. Insetting the probes from the trace edge helps minimize the effects of thermal gradients that might be caused by the presence of the pads. The resistance is measured between these probes with zero current (20˚C) and then with the test current (Note 8). The change in temperature is derived by applying Eq. 3.

Figure 4. Result of simulation of the model shown in Figure 3. 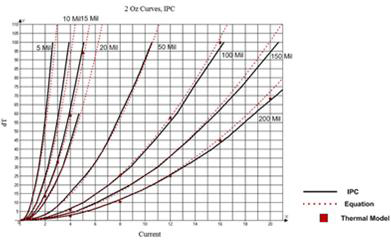 Similar simulations were run for internal traces and traces in a vacuum. All simulations fit the IPC data and their derived equations quite well. 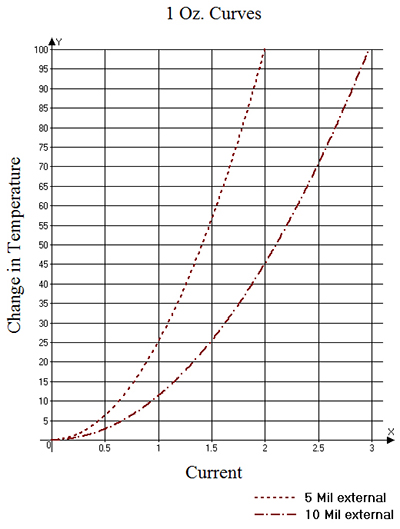 Figure 6. Narrow curves are very sensitive to changes in current.

We ran several thermal simulations to examine the sensitivity of trace heating to a variety of factors. The control simulation was a 6" long, 1.0 oz., 200 mil wide trace carrying 15A, with pads at each end. A schematic of the model (similar to that shown in Figure 3) is shown in FIGURE 7. In this control situation, the change in temperature was 94.9˚, as shown in FIGURE 8.

Figure 8. Thermal profile of the simulation in Figure 7.

One thing to notice from this simulation is the thermal profile. The hottest portion of the trace is at the midpoint (about 114.9˚C, which is 94.9˚ above ambient), as one would expect. But the temperature near the pads is much cooler, in this case about 60˚ above ambient. So when we are thinking about the maximum temperature of a trace, it is important to consider where that maximum temperature is going to occur.

If we do nothing but change the length of the trace, the results change:

It takes time for a trace to reach a stabilized temperature. The time can be impacted by several things. But on the other hand, the simulations we looked at were reasonably uniform in this respect. FIGURE 9 illustrates the transient response for our control simulation. Although the temperature will continue to rise for a very long time (up to 30 min.), it has reached very close to its maximum temperature within about 5 min. This may or may not have implications for board designs. 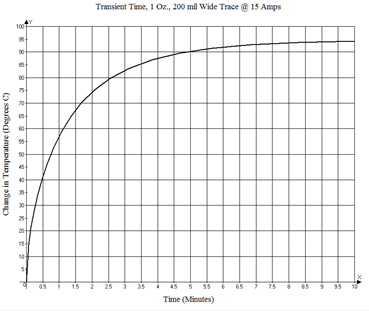 Figure 10. Thermal gradient in dielectric with no plane.

Figure 11. Thermal gradient in dielectric with a closely spaced plane.

Finally, we looked at a different material. All IPC trace data are taken with traces on a board with polyimide dielectric. Polyimide has a slightly higher thermal conductivity than does FR-4, for example. Thus, polyimide will result in a slightly cooler trace than will standard FR-4. All our simulations above were done with the dielectric assumed to be polyimide. When the control simulation was run with FR-4 instead, the trace heated to a temperature change of 122.9˚ (instead of 94.9˚).

Board material is a very difficult parameter to analyze. The material properties will vary between manufacturers. Thermal conductivity will vary depending on the direction; that is, the thermal properties in the X-Y direction will be different from the thermal properties in the Z direction. Materials with “tighter” weave will probably cool better than will materials with “looser” weaves. There are no dependable standards for measuring and reporting thermal conductivity. Therefore, board thermal characteristics may change somewhat if the material is changed (either knowingly or unknowingly).

After looking at several different simulations based on our control simulation of a 1 oz. 200 mil wide, 6" long trace carrying 15A and a polyimide board material, the results are a little less than comforting! They are summarized in TABLE 1.

As a result of the simulations, we can offer a couple of conclusions:

One overriding conclusion is inescapable. The relationship between trace currents and temperatures is very complex. It is too complex to model with a single set of equations or curves. Since board real estate is very expensive, board designers usually want to use the smallest traces their fabricators will permit while still meeting requirements. Optimizing board area when considering thermal effects does not seem to be possible without the use of sophisticated thermal simulation software.

1. Ref. 3 contains a good historical summary of the development of the original charts. Ref. 4 contains copies of some of these early references.
2. This paper summarizes the results of a much more detailed paper by the authors4. Many of the details regarding curve fitting and thermal simulations are covered in much more detail in that paper.
3. We used a program called GetData Graph Digitizer, available at www.getdata-graph-digitizer.com.
4. This equation has thickness in mils, while all the curves show thickness in ounces. We used the following conversions: 0.5 oz. = 0.65 mils; 1.0 oz. = 1.35 mils; 2.0 oz. = 2.7 mils; 3.0 oz. = 3.9 mils.
5. UltraCAD’s PCB4.0 Trace Calculator handles these calculations easily.
6. The software tool we use is called TRM (Thermal Risk Management) developed by Dr. Johannes Adam. See adam-research.com for more information regarding the tool and these types of simulations.
7. IPC-TM-650, Test Methods Manual, method 2.5.4.1A “Conductor Temperature Rise Due to Current Changes in Conductors” available at www.ipc.org/test-methods.aspx.
8. The temperature change can be determined by measuring the change in resistance and applying Eq. 3, or measuring the change in voltage, dividing by the current (to get the change in resistance), and then applying Eq. 3. In either case, the change in temperature that is measured is the average change over the entire trace length, not the peak temperature change at the midpoint of the trace.

Douglas Brooks, Ph.D., is owner of UltraCAD Design, a PCB design service bureau and author of PCB Currents: How They Flow, How They React; This email address is being protected from spambots. You need JavaScript enabled to view it.. He will speak at PCB West in September in Santa Clara, CA. Johannes Adam, Ph.D., CID, is founder of ADAM Research, a technical consultant for electronics companies and a software developer, and the author of the Thermal Risk Management simulation program.