Political and supply-chain issues could not slow printed circuit growth in 2021.

The author attended his first IPC meeting in 1966. At that time, the consensus was the world PCB output was $500 million. Some “knowledgeable” experts predicted PCB output would dwindle since semiconductors were rising rapidly and PCBs would not be needed. If that $500 million assessment was correct, in 55 years the PCB market grew 192 times, to $96 billion!

It is with that in mind that the author embarks on another attempt to establish the value of the world’s printed circuit board market, culminating in the NTI-100 list of the largest fabricators.

In fact, the author thought he would cease the NTI-100 report a few years ago. However, his curiosity about the world PCB industry (2022 is his 57th year in this industry) remains a motivator, and once again he made the NTI-100 list. Every year he wants to quit, but does not want to disappoint the industry. So, he may continue to compile the NTI-100 data so long as his brain has the capacity to be patient and functional. 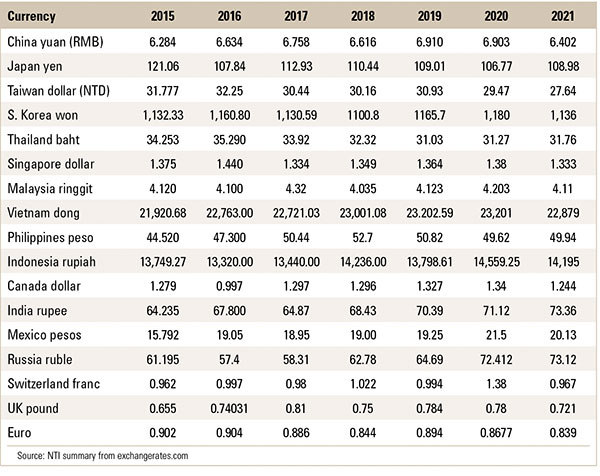 Most of the currency fluctuations have been relatively small. But since around March, the value of the yen started to decline rapidly against the US dollar. As of this writing, it is traded at about ¥136/$1. If this rate is persistent, Japanese fabricators’ ranking will be pushed down considerably in NTI-100 2022 edition. We shall see. Every year, there must be errors, which are the sole responsibility of this author. The rankings are reasonably accurate, hopefully. Please view them merely as reference.

Data are collected from annual reports for stock-listed fabricators. For privately owned companies, data compiled by TPCA and CPCA are used. For many others, the author’s industry friends helped. Using this opportunity, he would like to express his gratitude to those organizations and individuals for their able assistance.

A big challenge was to convert English names to local names and vice versa. Here, his knowledge of Chinese characters helped. Chinese companies have many names. To be clear, internationally recognized or recognizable names are used for English.

Simple comments are included in the last column of the table for those fabricators the author is familiar with. For many Chinese fabricators, their websites are substituted for comments because the author is not intimately familiar with them. For room, some descriptions are shortened. For example, IC PKG Sub stands for IC package substrate, which Taiwan and China call a “carrier board.” Likewise, Auto PCB refers to automotive PCB, and so on.

Of the 146 fabricators in the 2021 NTI-100, the author is personally quite familiar with about half. He visited their factories many times, and they are also well publicized. Brief comments are included to highlight their status. They are mostly publicly traded, and detailed information can be extracted from their websites.

The 2021 world PCB production value was $96 billion, which is the best estimate by this author. The value is derived from the NTI-100 list and from unranked companies. That sum includes about $9 billion of estimated assembly value, mainly made by flex circuit fabricators. But, in recent years, rigid board makers are also moving into this business arena. Of some 600+ Chinese makers this author investigated, about half are engaged in assembly and claiming a “one-stop-shop.” In many cases, their assembly business is larger than the bare board business. But most are small- to medium-sized companies and are not in the NTI-100. What the author is driving at is that it is impossible to accurately separate the assembly business from the total PCB output (bare board plus assembly). The bare board value was an estimated $87 billion in 2021.

In early 2000, the flex printed circuit (FPC) share of total PCB sales was only 4%. In 2021, the total FPC output was $18 billion, of which $13 billion was bare board. Hence, the FPC bare board share was 14.9%. Many top fabricators are FPC makers, such as Zhen Ding, DSBJ, Nippon Mektron, Kinwong, Young Poong Group, etc.

TABLE 2 shows the geographic distribution of the NTI-100. Total world PCB production was $96 billion. Of that, $57 billion was produced in China by Chinese nationals and foreign transplants. Broken down further, domestic Chinese fabricators accounted for 60%, or $34 billion, of the $57 billion, Taiwan transplants 29% ($17 billion) and the rest, $6 billion (11%), was made by AT&S, TTM, and Japanese and Southeast Asia transplants. Taiwan once had 35% of the PCB production in China. Although the Taiwanese production in China is growing, growth by Chinese fabricators is outpacing that of their Taiwanese competitors in China. Therefore, the gap between Taiwan and Chinese makers will widen. 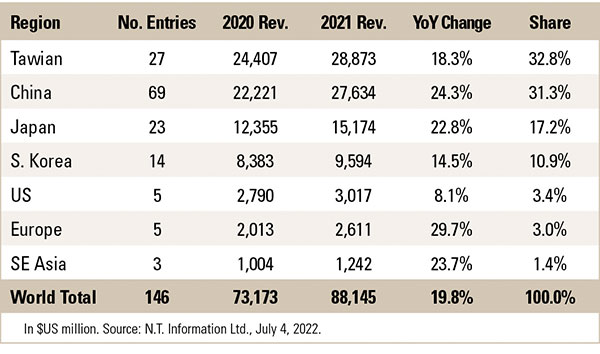 If Taiwan’s and China’s total outputs are added, the sum is $63.3 billion. That is, Taiwan’s and China’s “total output” is 66% (63.3/96) of the world production. This ratio is very close to the total share (64%) of the Taiwan and China fabricators on the NTI-100 list. With 100 or more new PCB projects pending over the next several years in China, many on a grand scale (if realized), China’s and Taiwan’s share of global production will exceed 70%.

Twenty-five fabricators achieved revenue greater than $1 billion in 2021, with 10 topping $2 billion (TABLE 3). In 2002, no company exceeded $1 billion. The top fabricator that year was Ibiden, with $932 million in revenue. A decade ago, in 2012, 13 fabricators had revenue exceeding $1 billion, of which four topped $2 billion. 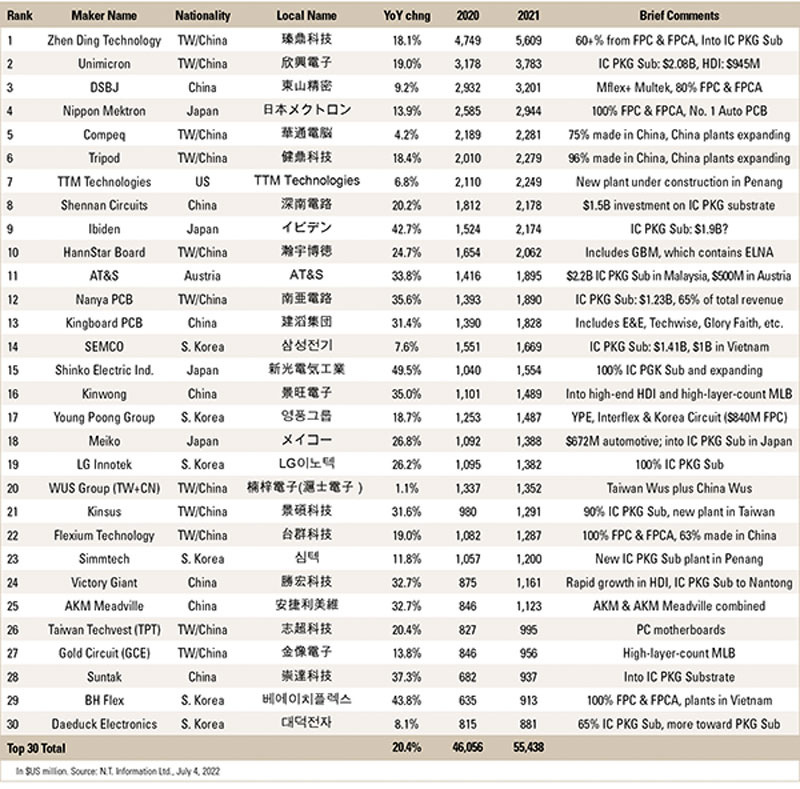 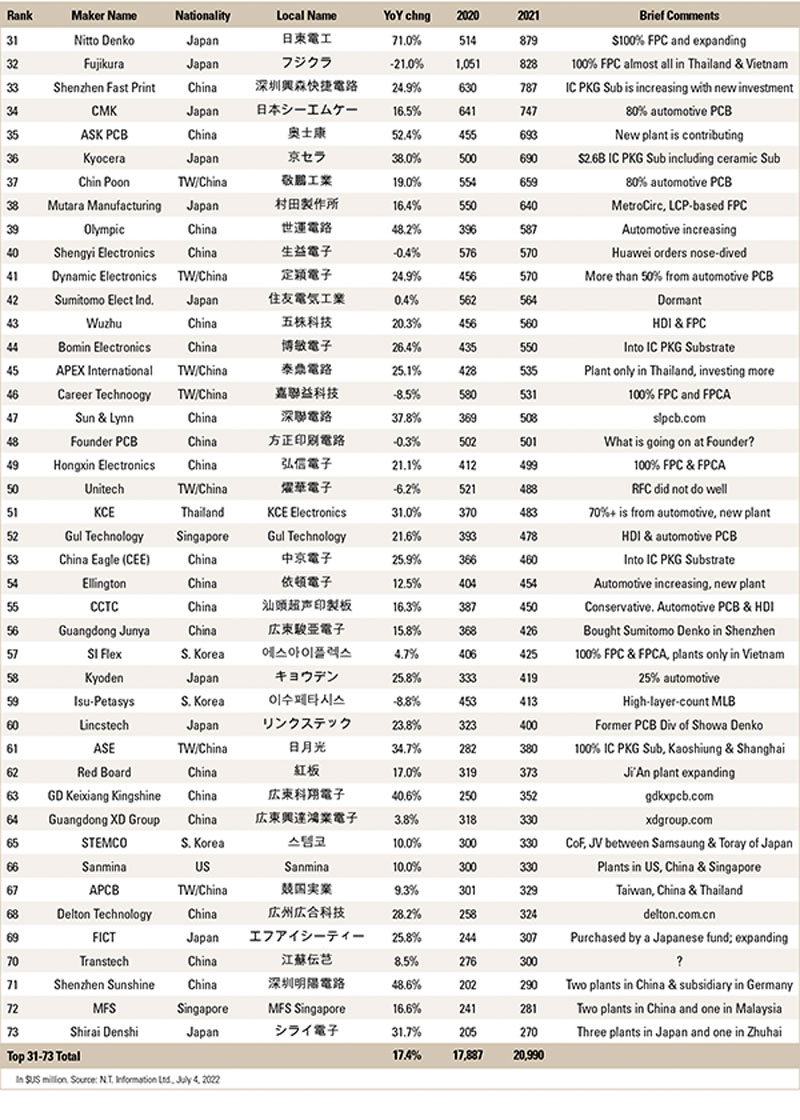 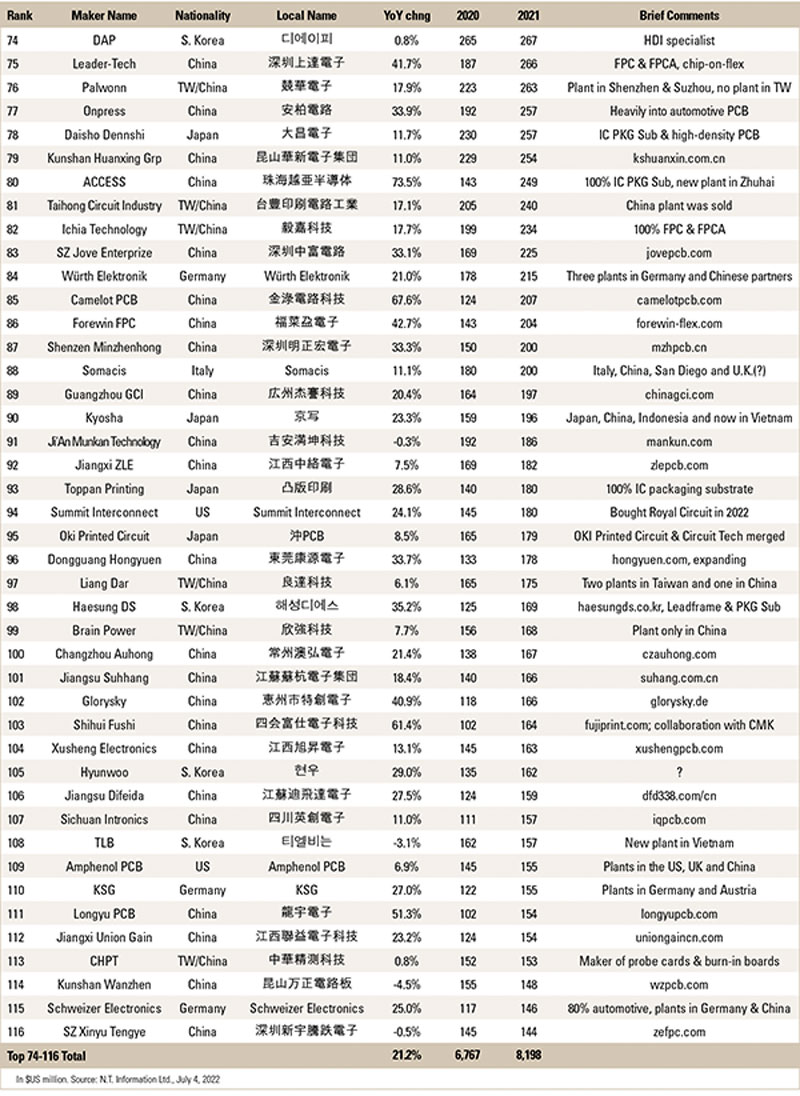 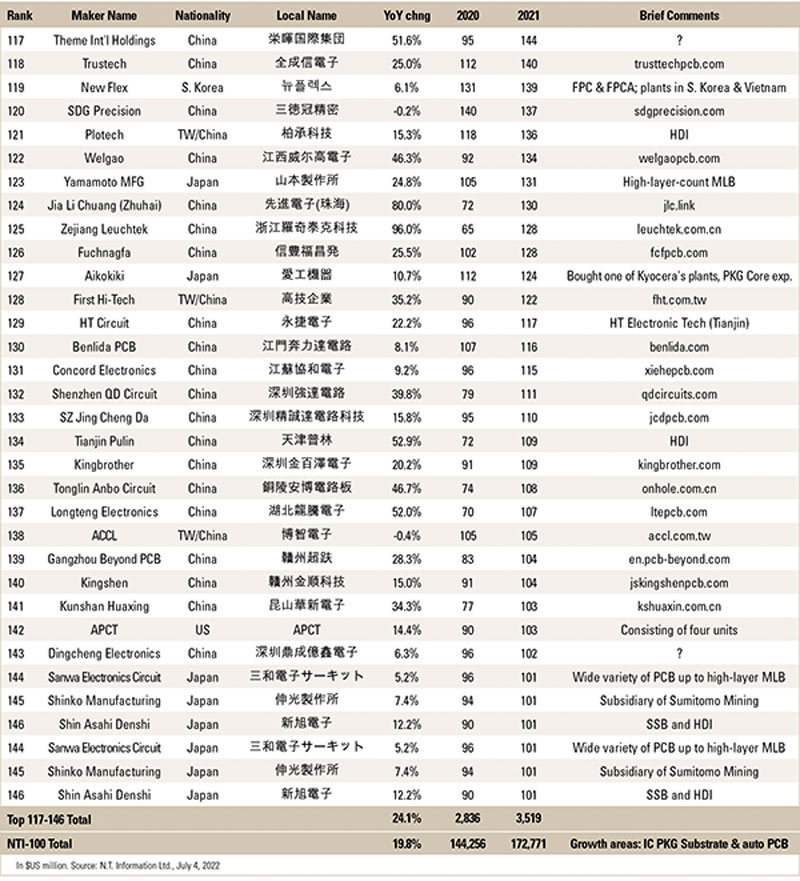 While the 146 companies on this year’s NTI-100 represent only 6% of the estimated 2,400 fabricators in the world, they produced 92% of the output. As we say, the big get bigger every year. Without investment, growth will be limited. There are some unrealistic remarks made that PCB will be replaced by just chips. What do you think? PCB output will continue to increase, at least in the lifetime of this author.

Due to the US-China trade and political tension and supply-chain disruptions in China caused by frequent and prolonged lockdowns, some fabricators are reluctant to put all their proverbial eggs in one basket (China). Work has begun on PCB plants in Malaysia, Thailand and Vietnam. PCB production in 2021 in these Southeast Asian countries, plus production in Singapore and the Philippines, was $7.8 billion. Soon production will exceed $10 billion annually. The rate of growth in China will be larger, however. 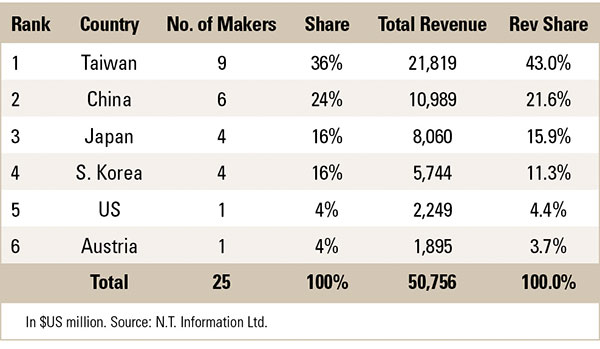 Finally, based on NTI-100 2021 data and additional data from Europe provided by data4pcb (Michael Gasch), TABLE 5 shows the world PCB output in 2021. 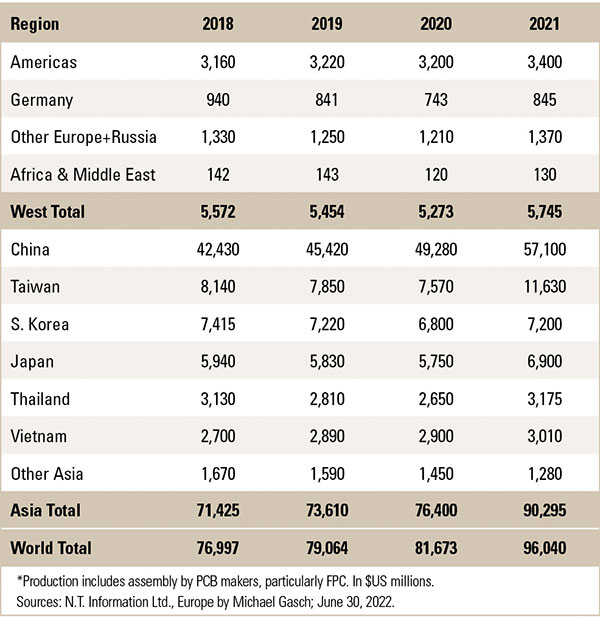