Simulated and experimental conclusions of temperature imbalances show significantly more efficient cooling around the outside of corners.

Through the years, the impact of right-angle corners on printed circuit board (PCB) traces has been a hot topic. As early as the 1990s, some were arguing strongly against the use of 90˚ corners, using mitered corners instead. They based this recommendation, typically, on one of two reasons:

In a landmark paper published in 19981, Brooks tried to put these arguments to rest. In that paper he showed:

A more recent paper4 shows an image of a 10mm (400 mil) wide, 35µm (1.0oz.) trace thickness, heated to approximately 80˚C. The image suggests there is about a 3˚C difference between the outer edge of the trace and the inside corner. The authors conclude:

This corner effect decreases the CCC (current carrying capacity) of bended traces compared to straight trace with the same width ….Value will be added if CCC design chart for bended traces can be a part of future PCB trace thermal design guideline.

This paper looks at the thermal gradients around the corners on a PCB.

We used a thermal simulation software tool (TRM6) to look at traces with right-angle corners. Four corner configurations were looked at, as illustrated in FIGURE 1.

The basic model used was a 5mm (200 mil) wide, 35µm (1.0 oz.) trace on a standard 1.5mm-thick FR-4 substrate. Two trace configurations were modeled: configuration A, a rounded, constant width corner, and configuration B, typical of what would be “drawn” with a Gerber file with a 5.0mm round aperture. A current of 8.0A was modeled, resulting in a temperature of approximate 44˚C (about a 24˚C increase.) A TRM model allows us to investigate (among other things) both the current density and the thermal characteristics around the corner. 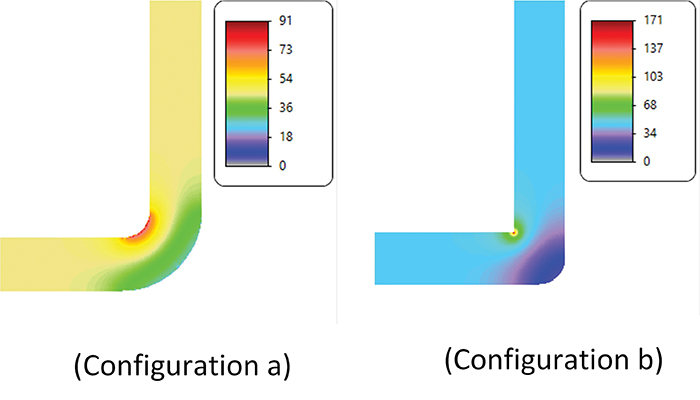 One might speculate the increased current density at the inside edge of the corner would lead to a temperature increase along the trace at that spot. Another argument, however, might be the thermal conductivity of the copper is so high no temperature gradients could develop. FIGURE 3 shows thermal profiles for the two configurations modeled. The small boxes record the temperature at the upper left corner of the box. 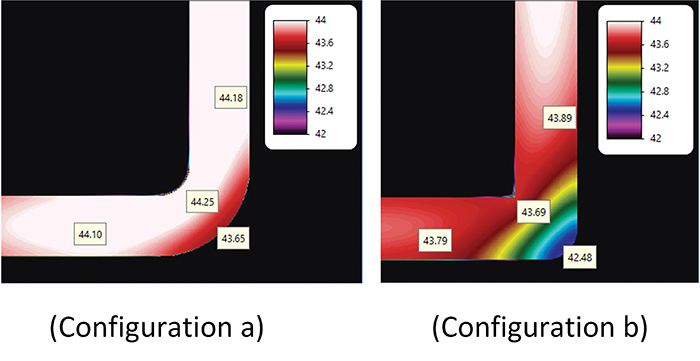 Figure 3. Thermal profile around the corners of the modeled traces. The temperature range shown is between about 42˚ and 44˚C. 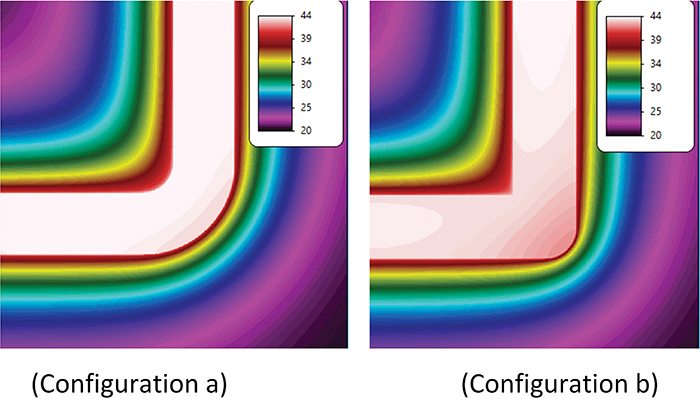 Figure 4. Thermal profile of the modeled traces and the board area around the traces.

Additional modeling, not reported here, results in the following observations: 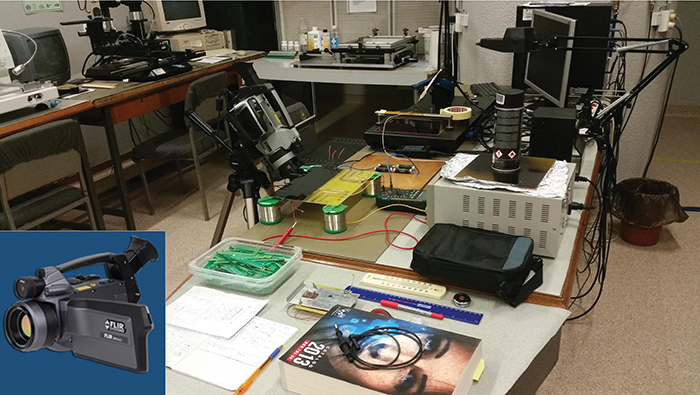 The experimental investigation was performed with a FLIR SC640 infrared (IR) camera with the following specifications: IR resolution (microbolometer grid size) – 640 x 480 pixels, IR spectral range – 7.5 – 13µm (long wave IR), focus – automatic or manual and Focal Plane Array (FPA) based on uncooled microbolometers, which are produced as heat sensors with active layers of vanadium oxide or amorphous silicon  placed on a silicon substrate. The electromagnetic radiation in the 7.5 – 13µm range hits the active layer and changes its electrical resistance. This resistance change is measured, processed and transformed by the IR camera into a temperature array, which can be represented graphically by the color display with the IR resolution specified above.

Additionally, for obtaining a better zoom of the thermograms, the authors used a close-up lens 0.5X (over the classical 24° lens, which has a close focus limit of 0.4m), having a focal length of 76.3mm and reducing the close focus limit to 60.3mm.

The test board was designed using Cadence/OrCad 16.6-2015 software and produced in the UPB-CETTI labs using PnP prototyping technology (FIGURE 6).

The PCB laminate is a standard FR-4 substrate of 1.5mm with a copper thickness of 35µm. The layout consists of two areas of PCB structures, placed in the upper and lower areas of the board, with the horizontal symmetry line in the middle. The lower area is identical, but mirrored vertically with the upper area. Each area is composed of:

FIGURE 7 presents the IR thermal investigation in progress. The color display of the IR camera shows a real thermal pattern for a 5mm PCB trace (round aperture) with right-angle corner, carrying a DC current of 8.0A, the setup consisting in a high current DC power supply, the test board, and a DMM for measuring ambient temperature, RH and various temperatures based on a K-type thermocouple. The DMM was also used for measuring exactly the DC current injected in the PCB trace. 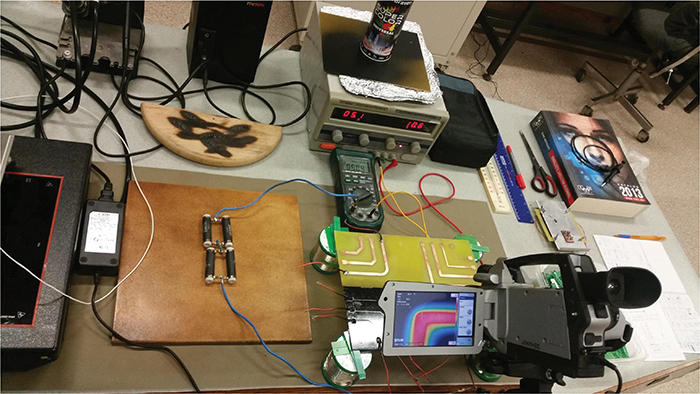 Codreanu has performed an investigation on the 2.5mm PCB trace (round aperture) with right-angle corner, carrying a DC current of 8.0A, the thermal pattern depicted in FIGURE 8. The temperature distribution (thermal pattern/map) is highlighted and numerically shown by the temperature scale from the right of the picture and the spots on the trace. 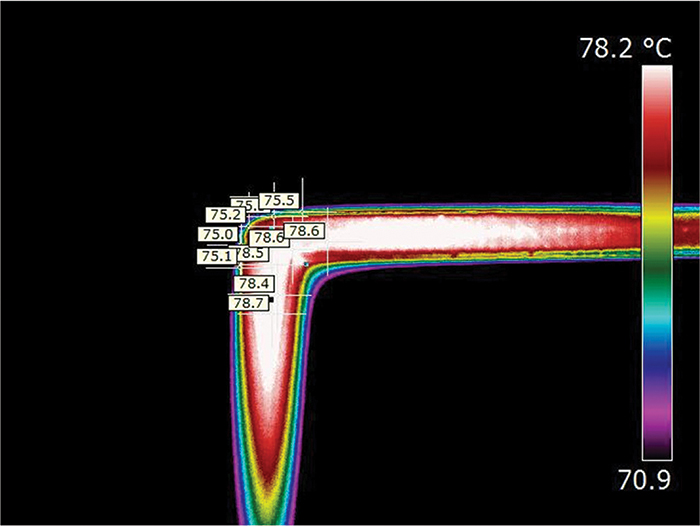 Figure 8. Thermogram of the 2.5mm PCB trace (round aperture) with right-angle corner, for 8.0A.

It was convenient to also record thermograms for a mitered and gently rounded corner. Thermograms in FIGURE 10 show the temperature distribution in the case of the 5mm PCB trace with round aperture, with shorter miter (left, see Figure 6) and with fillet/round corner (right) for a DC current of 8.0A. These results are consistent with the results predicted at the end of the Software Simulation section above.

Figure 10. Temperature distribution in the case of the 5mm PCB trace with round aperture, with shorter miter (left, see Figure 6) and with fillet/round corner (right), for 8A.

The temperature imbalances around a corner are not likely the result of the difference in current densities. More likely they are the result of the significantly more efficient cooling mechanism around the outside of the corners, where the open board area is much wider.

1. Douglas G. Brooks, “90 Degree Corners: The Final Turn,” Printed Circuit Design, January 1998, available at ultracad.com.
2. For a discussion of critical length, see Douglas Brooks, PCB Currents: How They Flow, How They React, Prentice Hall, 2013, p. 216.
3. While it is true there are no problems with using right-angle corners on traces, many designers still prefer mitered corners for aesthetic reasons. Some fabricators prefer mitered corners to right-angle corners for fabrication reasons.
4. Yi Wang, S. W. H. DeHaan and J. A. Ferreira, “Thermal Design Guideline of PCB Traces under DC and AC Current,” Energy Conversion Congress and Exposition, September 2009.
5. Douglas Brooks and Johannes Adam, PCB Traces and Via Currents and Temperatures: The Complete Analysis. See Chap. 4 for a full discussion of trace heating and cooling dynamics. See Sect. 12.1 for a discussion of why traces are cooler at the edge than down the centerline.
6. TRM (Thermal Risk Management) was created by Dr. Johannes Adam. TRM was conceived and designed to analyze temperatures across a circuit board, taking into consideration the complete trace layout with optional Joule heating, as well as various components and their own contributions to heat generation. A description of how to construct a basic TRM model can be found in Brooks and Adam, PCB Trace and Via Currents and Temperatures; The Complete Analysis, Chap. 6.
7. If a model has a sharp 90° corner, the mathematics may result in an infinite current density at that specific (infinitely small) point because of a singularity (think divide by zero). This does not have any effect on the rest of the model.