Manlio B. Melillo, Ph.D. ((August 28, 1927 - April 9, 2007) and Daniel P. Vlachos (1937-2007) invented the first high-speed electrolytic copper plating bath. They determined the proper composition of a bath with throwing power high enough to deposit copper substantially evenly between a flat surface and the apertures (through-holes), and in such a way to ensure a ductile, smooth and uniformly distributed copper deposit. Their patent paved the way to produce printed circuit boards in high volumes.

Melillo (pictured below) received a Ph.D with honors in chemistry from the University of Naples, Italy. Worked for 24 years as chief scientist on defense systems for firms such as Bunker-Ramo, Lockheed, General Dynamics, and as president of Datakote. He was awarded six US patents in thin-film coatings. 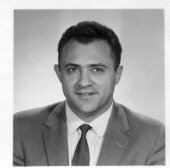