In the World PCB Rankings, Flex Shows Its Muscle

The annual list of the largest fabricators shows flex circuit makers are beginning to dominate.

In 1995, the author began collecting revenue data from the world’s top PCB fabricators. Originally the “100” in NTI-100 referred to the 100 largest companies. In the early 2000s, the definition of “100” was changed to manufacturers with revenues greater than or equal to $100 million per year.

As more privately owned Chinese fabricators ascend to the NTI-100, it is becoming harder every year to ensure accurate data. A fair number of Chinese companies own several “divisions” that are not obvious because these subsidiaries do not bear names suggesting they are owned by other fabricators. Some PCB companies are subsidiaries of large international corporations, and their data are not readily available publicly. The author must make calculated guesses, and several good-sized fabricators may be missing.

Fabricators with foreign operations convert the output from the local overseas currencies of those offshore locations to their home nation currency, which is then converted to US dollars. This step creates subtle differences depending on the exchange rates used. Therefore, as in the past, readers are reminded the ranking data presented here are not free from errors. Any mistakes are strictly the responsibility of the author.

Many individuals contributed to this report. TPCA and CPCA data were very useful. The author would like to express his gratitude to those who contributed to the completion of the NTI-100.
In compiling data, the following parameters were used:

Company comments are the author’s private views and may not be appropriate. The author is fully responsible for any errors.

Table 1. Average Exchange Rates vs. US$1 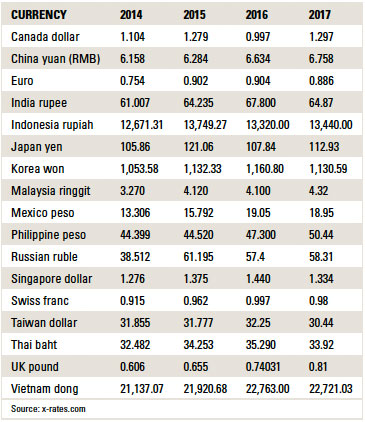 TABLE 2 shows the number of entries from each country represented in the NTI-100. Of the 115 entries, China has 46, or 40% of the total. The number of Chinese entries continues to increase. Taiwan’s 33% share is not surprising. Taiwan’s 2017 total PCB production (Taiwan, China and Thailand) was about $20 billion, and therefore 33% is reasonable. Although China has more than two times the number of Japanese entries, its share is nearly the same as that of Japan.
The US is TTM, and Europe is AT&S. No one will dispute that. 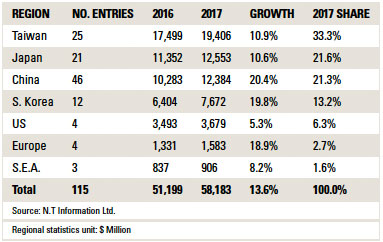 TABLE 3 compares the top 20 makers in 1998, 2000 and 2017. In 1998 and 2000, only one flex circuit fabricator was in the top 20: Nippon Mektron. In 2017, there were seven, all in top positions. What is responsible for this leap of flex fabricators? Smartphones! For example, the iPhone X uses about 20 flex circuits. Although 2017 leader Zeng Ding Tech has rigid board production, including HDI boards for Apple using the modified semi-additive process (MSAP), the largest portion of Zeng Ding’s sales is said to come from flex boards. No. 2 Nippon Mektron derives all its revenue from flex printed circuits.

Only four companies ranked in the top 20 in 1998 remain without a name change: Ibiden, Nippon Mektron, Compeq and Daeduck, all Asian makers. Hadco is now Sanmina. Mitsubishi Gas Chemical PCB Group (MGC) shut down Japan Circuit Industry several years ago, and Tai Hong Circuit Industry is now majority-owned by Chang Chung Chemical of Taiwan. The former IBM PCB group has two surviving members: One at Endicott, NY, is now i3, and IBM Yasu is now a part of Kyocera. IBM Germany is long gone. Viasystems, which absorbed Merix and DDi, is now a core part of TTM Technologies. Sixteen of the top 20 fabricators in 2017 were not on the list in 1998. Times have changed. Companies come and go. 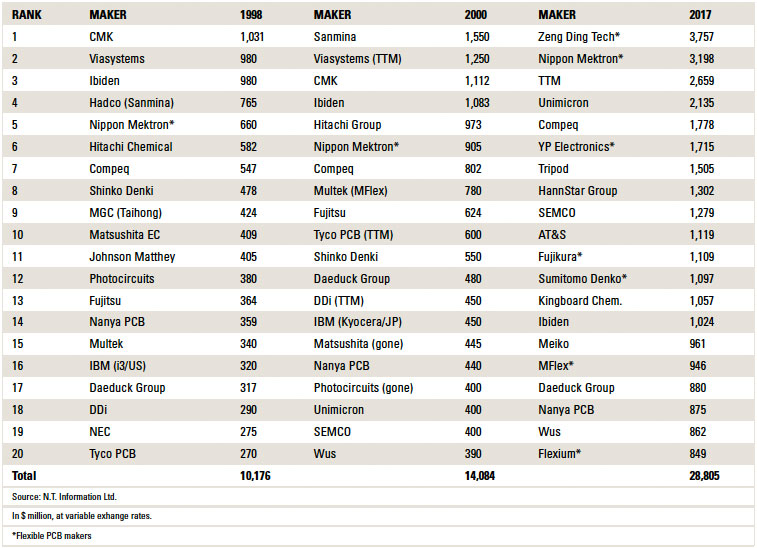 Except for Chinese manufacturers (TABLE 4), fabricators that showed good growth in 2017 are those serving the smartphone and automotive markets. The author cannot pinpoint the reasons why Chinese fabricators grew so much in 2017. 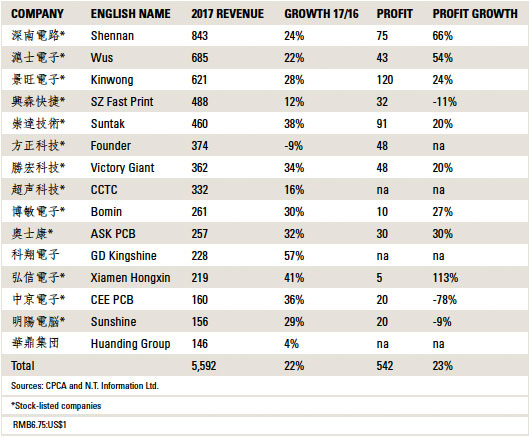 In essence, China is the only country where PCB fabricators can go public today. In 2017, seven companies went public, gathering $940 million in new funding (TABLE 5).

Japanese fabricators have stopped building new plants in China, although they still expand existing ones there. Their primary investments are in Thailand and Vietnam. But, Taiwan fabricators continue to invest in China, though not as vigorously as in the past. Chinese fabs continue to pour millions of RMB in new plants. Everyone wonders about their target markets. Equipment sales in China remain strong.

The reader may wonder where Murata (No. 40) comes from. A well-known components maker, Murata was the only supplier of liquid crystal polymer (LCP) based antenna boards to Apple. It has three manufacturing plants for this product and manufactures LCP internally for its own use. Murata aims at achieving $1 billion in revenue from this product by 2021. But, it is challenged by Career Technology of Taiwan. Career Technology entered the market this year with assistance from Apple. Many more flex printed circuit makers will join the LCP-based FPC market in the future, probably dragging down prices.

At least a dozen more are ready to join the NTI-100 soon. Refer to TABLE 6 for rankings and specific comments. Note that only one fabricator in 1998 had revenue greater than $1 billion. In 2000, four companies reached that mark. In 2017, some 14 companies topped $1 billion in revenue. 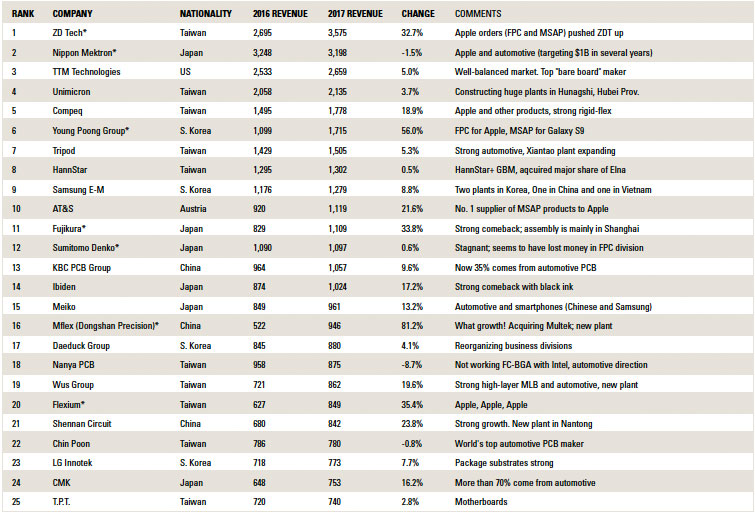 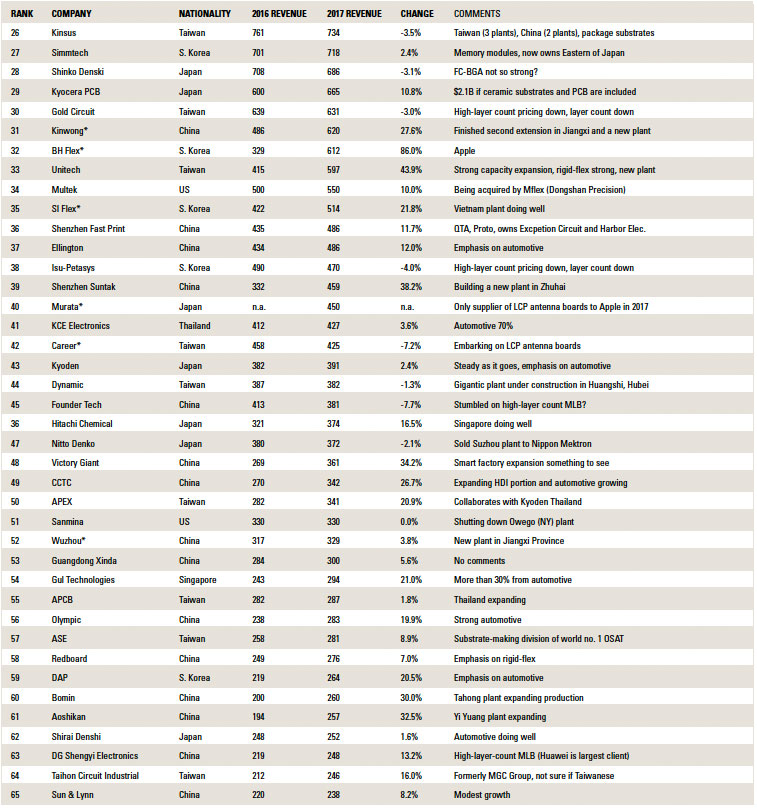 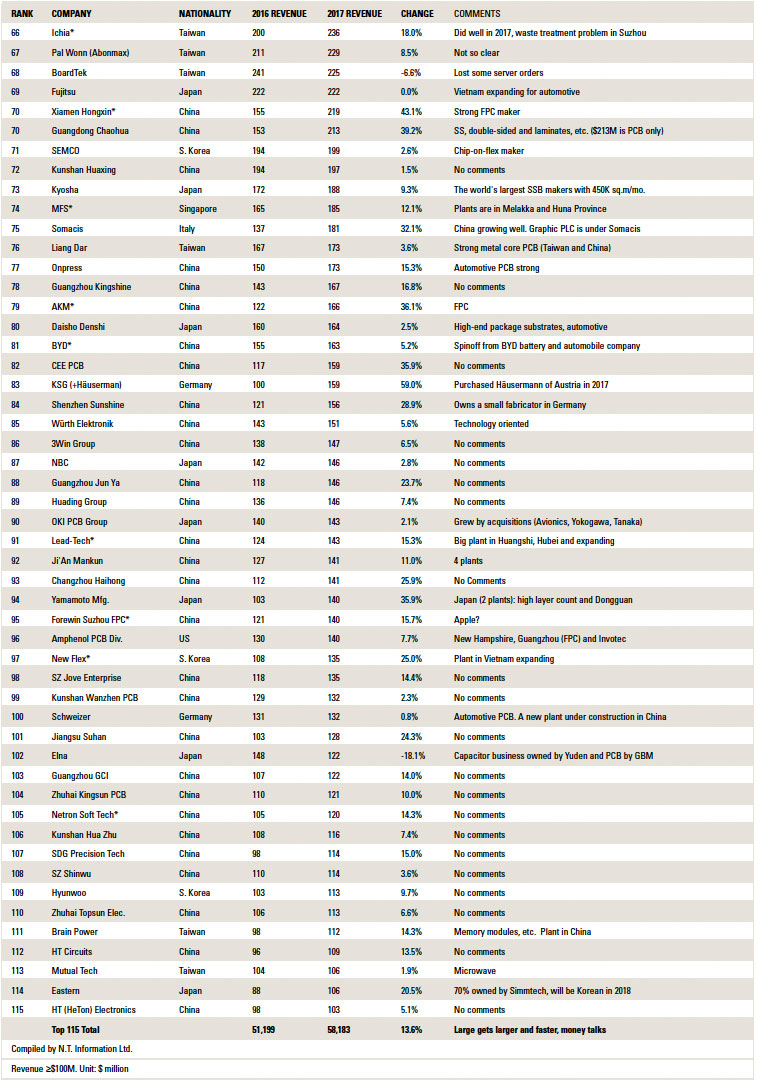