Advantages of Organic Polymers vs. ITO in Capacitive Touch Keys

PEDOT is gaining traction as a replacement for ITO-based designs.

Capacitive sensing technologies use an electrical field to detect conductive objects entering the switch field. At the touch of a finger, the switch recognizes a change in capacitance, indicating actuation. Touch displays are manufactured on a printed circuit board (PCB), polyimide or polyester circuits for direct contact with flat or curved surfaces. Determining the best substrate and combination of technologies is best addressed at the start of a project. Each option brings unique advantages and operational limitations, and uses different materials and processes.

As touch-based applications have proliferated, technologies built around indium tin oxide (ITO), with its inherent weaknesses (brittle, inflexible, highly reflective, and costly to pattern), prompted a search for alternative materials that could offer acceptable optical clarity, resistivity and easy processing at a lower overall application cost. Among those alternative materials, conductive polymers are gaining traction as a replacement technology for ITO-based designs. An acronym for the chemical name Poly (3, 4-ethylenedioxythiophene), PEDOT emerged as one of the most promising materials in capacitive switch design. A transparent organic polymer with conductivity properties, PEDOT is proving a cost-effective and acceptable replacement technology for ITO transparent film in an ever-increasing range of applications. 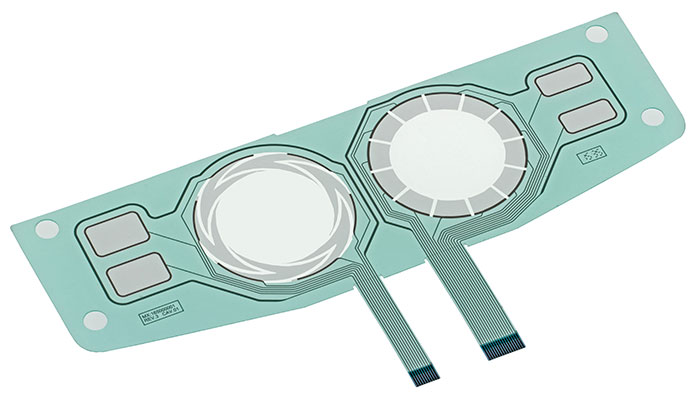 Additive vs. subtractive. The fact that copper and ITO-based touch displays cost more to produce than PEDOT-based touch keys is a reflection of the inherent differences in materials and manufacturing processes of the respective technologies. While PEDOT is an additive process, the other technologies are subtractive processes requiring the etching away of unnecessary material. Any subtractive process will start with more material, require etching chemicals, generate waste, and add extra steps for reclamation of unused material.

Conversely, PEDOT starts with inexpensive polyester film and adds the printed ink circuitry only where needed for the capacitive switch controls. The result is a more affordable, environmentally friendly and efficient manufacturing process for developing touch sensing keys and switch assemblies.

PEDOT properties. Two distinct properties – transparency and conductivity – set PEDOT apart from other polymers. PEDOT printed on thin transparent polyester film creates a conductive pattern for placement of capacitive keys on a non-metallic flat surface. This differentiates a capacitive switch assembly from full-screen touch technologies, such as smartphones where the entire screen surface is conductive.

Traditionally, a PCB or copper circuitry was mandatory for soldered components. High-temperature soldering has not always been possible when working with a polyester substrate due to the risk of melting. Low-temperature soldering processes now make it possible to incorporate chips and other fine-pitch miniature electronics directly on the PEDOT-based polyester substrate. The fixed conductive surface makes wear virtually nonexistent.

PEDOT material is recommended for use only in transparent areas of a polyester substrate. Another additive process, silver ink, can be used in areas requiring higher electrical performance. Cured PEDOT polymer has a subtle gray-blue tint. The discoloration makes it unsuitable for high-resolution applications. However, the polymer is a solid option for virtually any low-resolution application with fixed backlit keys. 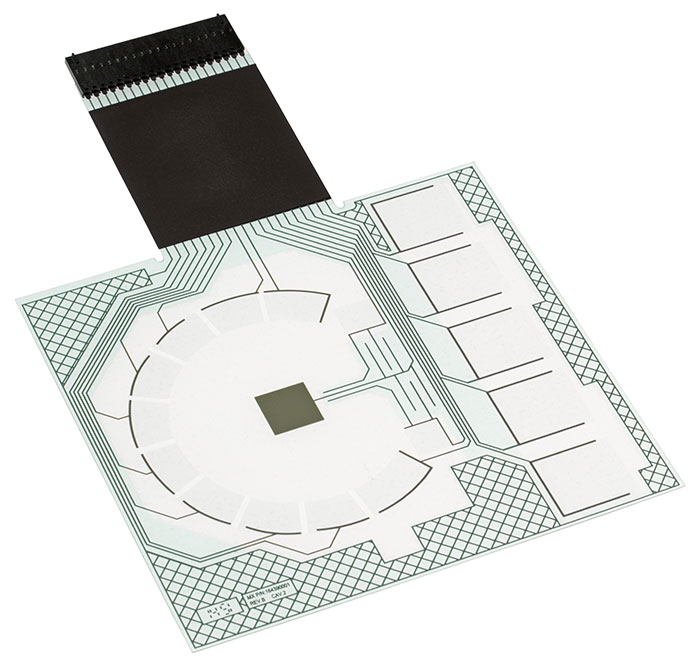 Whether operating keys on a touch screen in a passenger car or on an industrial machine control panel, end-users expect intuitive touch key prompts, setup and controls. Deployed strategically, lighting can create maximum impact, while drawing attention to key functions and guiding a user by visually identifying available options at each step via multi-color lights or contrasting lighting intensity.

Positive feedback. Consumers want cars, dishwashers, fitness equipment, and thermostats that are more like their smartphones. They shop looking for “bang for the buck” in terms of added-value features. Sluggish or unresponsive touch screen switches are a nonstarter – frustrating manufacturers and their customers.

PEDOT technology provides approximately 90 to 95% transparency of ITO with slightly lower overall performance. However, the cost savings and other positive properties can be a winner in many touch key applications. More costly and brittle, ITO does not permit much flex without causing damage, whereas PEDOT is flexible, making it more versatile for user interface design. The technology offers numerous advantages to traditional mechanical and PCB capacitive switches.
The possibilities for incorporating user-friendly controls and icons onto PEDOT-based switches are virtually limitless. And all PEDOT circuits are custom-designed to the specifications for an application.

Steve Fulton is engineering manager at Molex (molex.com); This email address is being protected from spambots. You need JavaScript enabled to view it..