The target style of the x-ray tube impacts magnification, resolution and quantity.

In last month’s column I explained the impact a transmissive or reflective target style of x-ray tube will have on the available magnification of an x-ray system. The difference between the two target types is shown in FIGURE 1. Not just the magnification is altered by the choice of target, however. The focus, or resolution, of the tube, as well as the flux, or quantity of x-rays, that the tube produces will also be affected. This is caused by the x-ray tube settings. 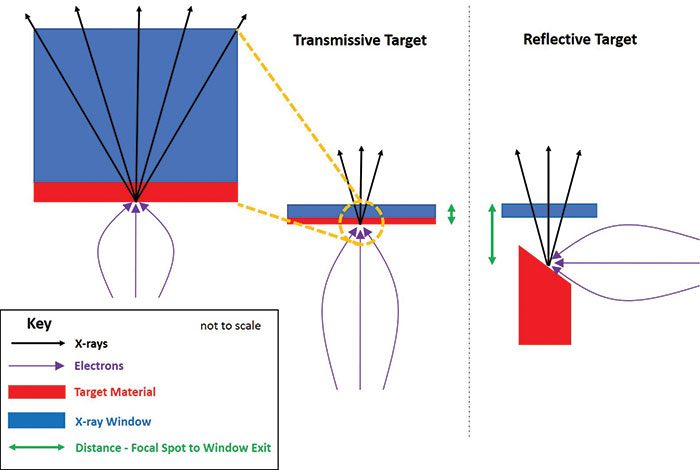 An x-ray tube has two primary control parameters. The first is the accelerating voltage, or kV, that is applied to the electrons generated within the tube. The higher the kV, the more penetrating the produced x-rays. In other words, the higher the KV, the greater the thickness and/or density of sample material the x-rays can pass through. If none of the x-rays can pass through, they cannot reach the detector, be captured and produce an image! The penetrating power of the x-rays is related to the (atomic number)3 of the material it passes through. Therefore, remember the same x-rays will pass through a lot less gold than aluminium.

The second control parameter is called the target current and is a measure of the number of electrons hitting the target per unit of time. Increasing the target current means more electrons impact the target, producing more x-rays/increasing the x-ray flux emanating from the tube. This control can be seen like a dimmer switch on the x-ray light source. However, like a dimmer switch on a household light, you cannot continue increasing this indefinitely without “burning out” the “bulb.” Therefore, the x-ray tube is limited to a maximum target current. This maximum will differ depending on the kV used, as there are limitations to the power available from the high voltage power supplies driving the tubes. At low kVs, more current is required from the power supply to maintain the same output power compared to high kVs (power = kV x current).

An additional parameter, usually automatically controlled by the x-ray tube following its optimization, is for the operation of the focus coils used within the tube to, as their name suggests, squeeze the electrons into as small a (focal) spot as possible on the target. The smaller the focal spot, the smaller the point of emission of the x-rays, and, therefore, the better the resolution of the tube (FIGURE 2). 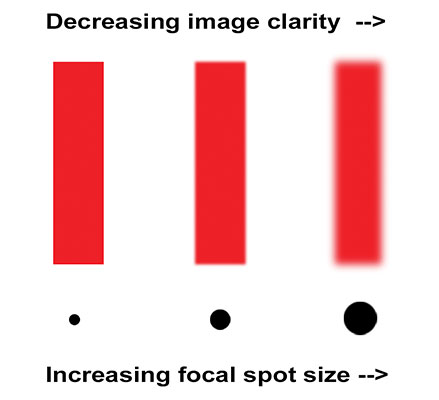 Figure 2. Schematic indicating the effect on the focus of an x-ray tube as the focal spot size increases.

Considering the above parameters, the x-ray tube manufacturer must compromise/balance several conflicting requirements when defining which target type to use. On one hand, the best resolution tube to see the smallest features will have the smallest focal spot, but this puts a lot of electrons into a very small area on the target and means very high current densities. High current densities generate heat that has to be removed, or else it could damage very thin transmissive targets, which may rely only on air-cooling to remove heat, so limiting the maximum target current it can handle. A reflective target could be water-cooled and so handle larger currents. On the other hand, the target surface will be more greatly affected/modified by high-resolution x-ray generation, and fresh target areas for the focal spot will be needed periodically. Often transmissive targets can be easily and quickly moved or replaced to retain the best resolution, but usually the design of reflective target tubes does not permit such a capability, so lower resolutions/larger focal spots are used in these tubes to prolong target life. Additionally, as the kV increases, the incoming electrons have extra energy that can produce x-rays – not just from the primary impact but also from secondary electrons that the primary can cause. This means the focal spot is somewhat broadened as the kV increases.

Using the same focus settings at the highest available magnification that a transmissive tube can achieve (FIGURE 4), however, shows the differences very clearly on the details of the 25µm diameter wires. Of course, the reflective target tube could not achieve this level of magnification in the first place!

The target style of the x-ray tube in an electronics x-ray system impacts magnification, resolution and flux. This, therefore, affects the image detail and quality. The trade-off between these factors must be considered to ensure the best available image to provide the best analytical information for your applications, now and in the future.

David Bernard, Ph.D., is an expert in use and analysis of 2D and 3D (CT) x-ray inspection techniques for electronics; This email address is being protected from spambots. You need JavaScript enabled to view it..