The ECAD Industry is Firing on All Cylinders. No Wonder Wages are Rising.

Salaries spiked in the past year. Can it last?

Inflation is hitting in all corners, but salaries are rising too. That’s according to the latest PCD&F/CIRCUITS ASSEMBLY salary survey of printed circuit designers and design engineers.

About 85% of those responding to the annual survey indicated their wages rose at least 1% in the past year, with more than 22% reporting hikes of seven percent or more. That’s an acceleration from 2021, when 47% of designers indicated their salaries were on the rise.

PCD&F/CIRCUITS ASSEMBLY surveyed designers and design engineers (for brevity, we will use the term “designers”) over a 60-day period between May 19 and Jul. 19 this year. More than 200 designers responded to the survey, which is designed to capture a snapshot of the salary and compensation trends. PCD&F has conducted the survey for more than 25 years.

The sharp uptick – one of the largest seen since we started collecting the data – shows the ECAD industry is in line with broader employment trends. Unemployment in the US stood at 3.6% in May and June, and over the past 12 months average hourly earnings have increased 5.1%, according to the US Bureau of Labor Statistics.1 Meanwhile, in China the rate stood at 5.5%, and across Europe the rates were falling as well.2

For its part, ECAD companies reported employment of 51,328 workers globally in the first quarter 2022, the latest period data are available, up 4.7% increase from the year before.3 The industry is firing on all cylinders.

The full-length version, which follows our traditional survey design, asked 38 questions that captured additional data on the types of boards designers work on, the number of designs produced annually, professional certifications and tool use, among others. More than 90% of respondents opted for the longer version.

Of the 206 respondents, more than 29% indicated they are PCB design/senior design engineers, with another 33% reporting PCB designer/senior designer as their title. About 10% are electrical engineers, 12% hardware engineers, and about 4% management (TABLE 1). 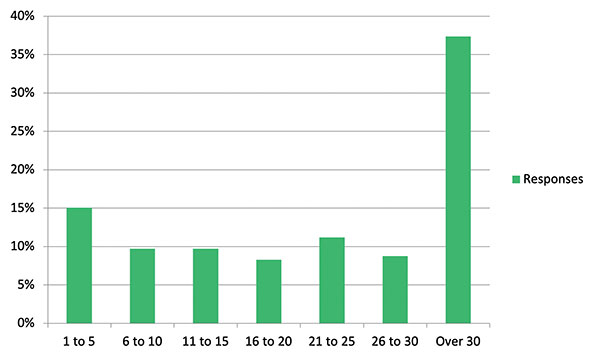 Most respondents were from the US, with about 9% from Canada, 13% from Europe, and a few from Africa, India and South America mixed in. Greater Asia is poorly represented in the results. Our belief is language is a persistent barrier to participation from non-English speaking countries.

As a percentage of respondents, education level was consistent with previous surveys, as 35% of respondents have a degree in engineering or a related field, and another 15% have at least a master’s degree.

Show Me the Money

The current salary data were eye-popping. As noted earlier, salaries are on the climb, with 27% reporting a four to six percent increase year-over-year and 22% saying it was seven percent or more (FIGURE 2). 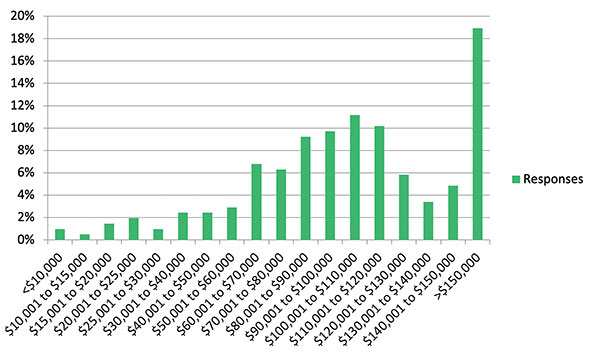 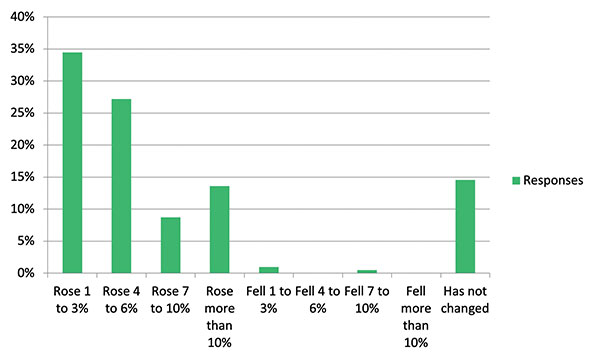 Sweetening the pie, more than half said they receive an annual bonus, with 47% of those getting more than 7% in additional compensation.

While more than half (55%) report being at the top of their company’s salary range for their position, only 7% reported changing jobs in the past year. Will that hold if pay levels off over the next 12 months? 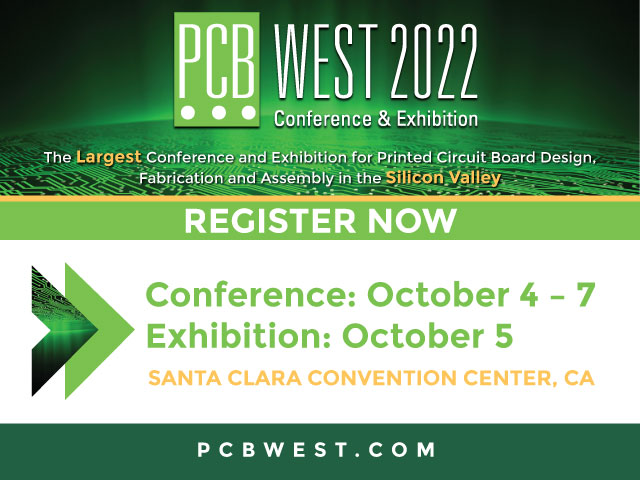 The median number of new part numbers produced per annum was six to 10, with about one-third of respondents answering five or fewer new designs, and 14% saying they do 21 or more new part numbers each year. More than half perform one to five respins, and 24% perform 11 or more redos each year.

The typical respondent spends at least half of their time each week on board design, including schematic capture, layout, and place and route (FIGURE 4). Fewer than one-fifth of those surveyed indicated spending less than one-fourth of their time on the core design responsibilities. 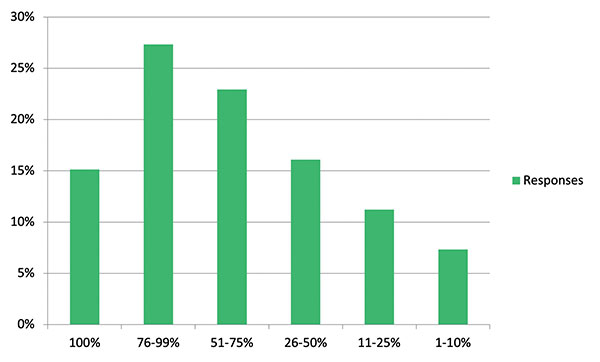 Two-thirds of designers feel workload is the biggest professional challenge they face this year, followed by keeping up with technology changes and company support for professional development (FIGURE 5). 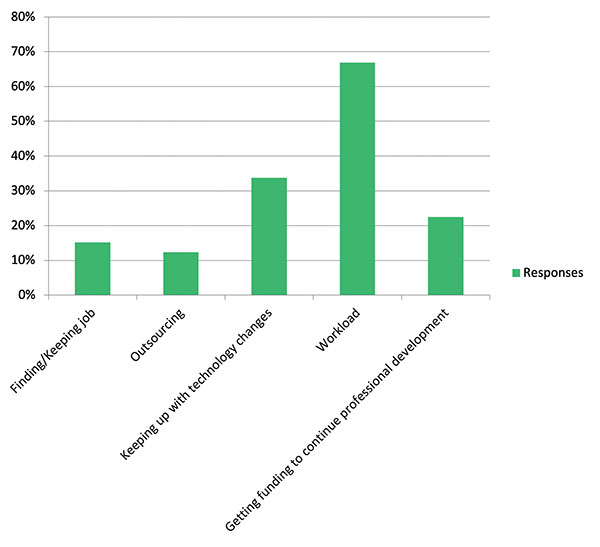 By tool vendor, the most common regularly used software was Cadence (OrCad and Allegro), at just over 50%. Altium was second, at 48%, with Siemens/Mentor (Pads and Xpedition) third at 24%.

While more than 54% of respondents indicated they are very satisfied in their current jobs, some 42% reported plans to work for five years or fewer. Recruiters, it’s time to work your magic. •

Mike Buetow is president of PCEA (pcea.net); This email address is being protected from spambots. You need JavaScript enabled to view it..