An Ode to Pi

As March approaches each year, I can count on the bullfrogs around our neighbor’s pond to be out in force, memories of days coaching baseball and softball, my wife’s birthday, and on March 14, “Pi Day,” which has been celebrated by geeks around the globe since 1988. I take the day seriously due to pi’s prevalence in almost every field of science, ranging from astronomy, electromagnetics, physics, to probably several other fields I’m not even thinking about. How did pi find its way into so much science, and what are the implications for electromagnetics?

Before we go into details regarding the time and frequency domains, it’s beneficial to discuss the “unit circle” and radians. A unit circle is simply a circle with a radius of 1 (regardless of units). The circumference of a unit circle is 2π, meaning that one cycle would be 2π, and there would be 2 x 3.14 radians required to complete the circle. This is illustrated in FIGURE 1. 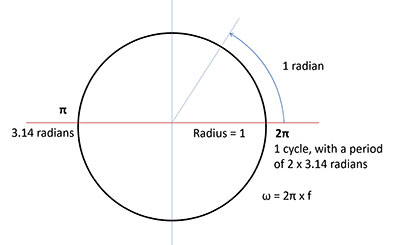 Figure 1. The unit circle has a radius of 1 and a circumference or period of 2ω.

2π is the period or circumference of the unit circle. Without the mathematical relationships tied to the circle and pi, it would be very difficult for signal-integrity simulation software to model the behavior of signals without building circuit boards and making physical measurements. In other words, we’d only know what was going to happen after it already happened.

Angular frequency’s connection to electromagnetics is discussed below. For now, just realize the number of times we sweep through the period per unit time is the angular frequency, typically represented in radians per second.

The time domain. We’re naturally more familiar with the time domain, which we deal with in everyday life, but the frequency domain can provide valuable insight into signal-integrity effects, impedance and loss. To understand this connection, we need to discuss both the time and frequency domains. Dr. Eric Bogatin1 does an excellent job of describing the differences and distinctions, so I’ll leverage that information with his permission.

Using relationships well-known in the time domain, the clock frequency shown in FIGURE 2, Fclock, represents the number of cycles per second the clock goes through, which is the inverse of the clock period, Tclock. 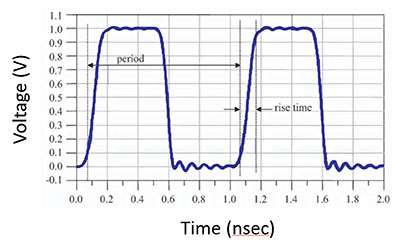 The math is easy if we represent frequency in gigahertz and the clock period in nanoseconds. The signal in Figure 2 has a frequency of 1GHz. Similarly, a 10GHz signal has a period of 0.1ns.

It’s important to note the time domain is the only domain that’s real. What we describe as the “frequency domain” below connects the time domain to the title of this article.

In the frequency domain, everything’s a sine wave, and sine waves are everything. Any waveform in the time domain can be completely characterized by a combination of sine waves. And mathematically, we know all about sine waves.

Sine waves typically provide a straighter path to an answer because of the types of electrical problems we often encounter in signal integrity. Transmission lines, in a simplified sense, can be represented as networks of resistors (R), inductors (L), and capacitors (C). As Bogatin1 notes, if we “send any arbitrary waveform in, more often than not, we get waveforms out that look like sine waves and can more simply be described by a combination of a few sine waves.”

“But what about pi?” you might ask. Well, sine waves have amplitudes, frequency (and periods), as well as phase. The frequency (f, measured in hertz) is the number of complete cycles per second made by the sine wave. Angular frequency is measured in radians per second. As shown in Figure 1, radians describe fractions of a cycle. Figure 1 shows there are 2 × π radians in one complete cycle. As a physicist-friend recently said, “We humans can devise other angular systems to our taste, like say 360°, because, hey, the number divides really well; but they are arbitrary. When we finally meet up with the guys from Zeta Reticuli, they are unlikely to have 360° circles, but they will agree that a circle or cycle is 2π.” That’s because the ratio between the circumference of a circle to its radius will be the same in Euclidean spaces.

Impedance and reactance. As mentioned, transmission lines can be represented by a network of parasitic resistance (R), conductance (G), inductance (L), and capacitance (C). Each of these impedes current flow. We characterize these factors that impede current flow as follows:

The impedance relationship is

We could go much further here to discuss conductor loss and dielectric loss in the frequency domain as well. Again, angular frequency, pi, and imaginary arithmetic are involved. I’m running long here, so I’ll save that discussion for another day, and will simply close by wishing everyone a happy Pi Day!