Or what the @#$% is a squircle, and what is it doing on my stencil?

The term “squircle” is a portmanteau, or mashup, of square and circle. It’s a real word, and the shape is also known as a superellipse to supernerds. We jest, but besides having a funny name, the squircle is an effective tool for maximizing solder paste release and overall deposit volume.

A squircle (FIGURE 1) is a square with rounded corners that, when incorporated into stencil aperture designs for small area arrays, provides better print quality than either a square or a circle alone. It brings the best of both worlds to an extremely challenging part of the printing process.

In recent extensive print testing at AIM’s Juarez, Mexico, applications laboratory, on a print test vehicle that contained aperture shapes including squares, circles
and squircles, we were able to make a strong case for the squircle as a solution to many print challenges. Comparing apertures of the same major dimension (diameter or side length) and area ratio, we were able to directly compare transfer efficiencies, actual deposit volumes and volume repeatability of the three shapes.

DfM experts purport the squircle as the optimized aperture design for fine features. Here’s why:

Squares. A square has the inherent benefit of maximizing the area of an aperture. (It’s why White Castle hamburgers are square: no wasted space on the griddle). When printing solder paste, however, the particles tend to agglomerate into sharp aperture corners, resulting in more variation from deposit to deposit. It is also likely this variation will grow over time if the stencil wipe efficacy diminishes and the paste accumulation increases. Squares inherently have higher volumes than circles for the same major dimension, so of course they will deposit more paste, but if those paste-grabbing corners overlap pad edges, they also create gasketing problems that can drive high variation.

Circles. Circles have no pad-overlapping corners and no paste dead zones, thus eliminating the two major issues associated with squares. But because of their lower aperture area they inherently print less solder paste. Additionally, circles have equal surface tension across the diameter of the aperture. During separation, this may increase the amount of solder paste that remains in the aperture. Imagine a soap bubble on a flat surface; equal surface tension keeps it stable. This same characteristic discourages paste from exiting the circular aperture. A square, however, exerts unequal forces that facilitate release.

Squircles. The squircle combines the volumetric benefit of a square without the paste accumulation or the larger overlap or of sharp corners that the circle brings to the process. FIGURE 2 shows the measured transfer efficiencies and calculated coefficients of variation of each type of aperture. 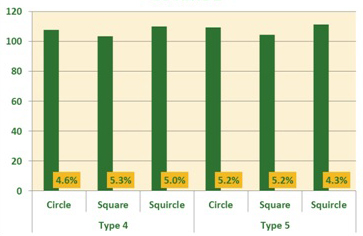 Notice the transfer efficiency is slightly lower on the square than the circle, but only by a few percentage points. The square also has slightly higher variation on the type 4 paste, and is equivalent to the type 5 paste data. The squircle consistently has the highest transfer rate, and comparable or lower variation than the squares or circles.

FIGURE 3 shows the average volumes deposited by each aperture shape. Note that although the square showed lower transfer efficiency, its larger area resulted in higher volumes than the circle. But the squircle deposited the highest volumes of all apertures. In all cases, the type 5 paste consistently produced marginally higher volumes, but not enough to justify a transition to it in a production environment where cost, separate storage and reflow issues would arise. The differences in volumes, while trending consistently, are not significant for this size aperture, which, in this case, was for a 0.4mm BGA, the smallest component footprint on our test board. It is reasonable to expect similar performance improvements on smaller area ratios as well. 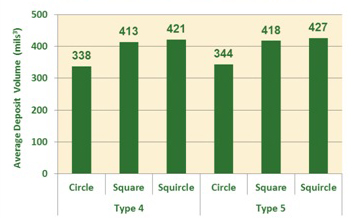 Note that transfer rates are very high and variation rates very low compared to typical results from similar print tests. These print tests were conducted under an ideal environment, using a polymer nanocoated stencil. It is reasonable to expect similar trends in production environments, but likely with lower transfer rates and higher variation rates. It is also reasonable to use nanocoatings on stencils with tight area ratios because of the (frequently documented) quality improvements they provide.

Data collected, but not shown here, also indicate the squircle is more robust against the effects of room-temperature aging and long pause times (>60 min.) between prints. More data on this study will be published and presented at the upcoming IPC Apex conference.

Squircle: the hybrid aperture with a funny name that gives a nice boost to fine feature print quality. Give it a try!