TSV has become reality. How many ways can it be used in 3-D packaging?

The IEEE Electronics Components and Technology Conference (ECTC) welcomed more than 1,500 attendees to Las Vegas. Registrants in the hallways pondered the impact of trade disputes, while conference sessions focused on the latest developments in electronics packaging. A preconference workshop provided insight into progress on the Heterogeneous Integration Roadmap activity. (Per IEEE, heterogeneous integration is the integration of separately manufactured components into a higher-level assembly such as SiP that, in total, provides enhanced functionality and improved operating characteristics.) Several chapters are almost ready for release. Throughout the conference many presentations focused on heterogeneous integration packaging solutions. A number of companies have proposed a strategy of chiplets to achieve the economics of scaling previously achieved with silicon scaling. A variety of new architectures were described at ECTC.

The industry is moving into a new era of 3-D integration with many formats. Adoption of through silicon vias (TSVs) has become reality. The hallway discussion is no longer about when TSV will happen, but rather on the multitude of ways TSVs enable the required packaging solution. Of course, a TSV solution is not appropriate for every 3-D application, but the industry is seeing increased adoption of the technology.

GlobalFoundries and ASE discussed a die-to-wafer (D2W) process for 3-D packaging of logic on advanced semiconductor nodes. CEA Leti and STMicroelectronics detailed research on a new 3-D architecture using chiplets on an active interposer. TSMC presented its system on integrated chips (SoIC) process for 3-D heterogeneous integration, in which an active wafer is used instead of a passive interposer. IME A*Star described an active TSV interposer-based IC design, fabrication, assembly and test process. Researchers from UCLA discussed through wafer via development for a silicon interconnect fabric and presented work with Keysight Technologies in the integration and characterization of indium phosphide (InP) on the silicon interconnect fabric.

Many organizations discussed developments in materials, equipment and processes to permit wafer-to-wafer (W2W) and D2W bonding. While many presentations focused on Cu-Cu bonding, EV Group described recent work on Al-Al direct bonding. Organizations such as CEA-Leti, Fraunhofer IZM-ASSID, IME A*Star, IMEC, Sandia, Xperia and many universities continue work on processes. While examples of hybrid bonding at image sensor companies including Samsung, Sony and STMicrolectronics are well known, companies including TSMC have this technology on their high-performance technology roadmaps. Samsung described some of its latest work on Cu-Cu hybrid bonding, focusing on grain size and orientation to improve connection and reliability.

Many versions of package-on-package (PoP) were presented this year. TSMC packed the room with a paper on its 3-D Must-in-Must technology for advanced system integration, in which memory die are embedded in a fan-out structure connected to the SoC to decrease total package height. Nepes described a 3-D structure using FO-WLP.

Thermal challenges remain with many 3-D solutions, and there were many discussions on materials and processes. A presentation from Samsung Electronics discussed use of silver paste to improve thermal dissipation in a stacked die solution for a 5G modem application.

Developments in materials for both round and panel formats were presented this year. TOK, in conjunction with researchers from Georgia Tech, presented the design and demonstration of a 1µm low-resistance redistribution layer (RDL) for panel processing. 3M discussed its laser-releasable temporary bonding material, and Brewer Science and IMEC described advances in temporary carrier technology. Toray Industries presented a low-temperature curable positive-tone photosensitive dielectric material, and HDI Microsystems described its negative-tone photoresist with a low-cure shrinkage. ULVAC introduced a high-rate, low-damage etching method for use as a pretreatment for seed-layer sputtering in panel production. 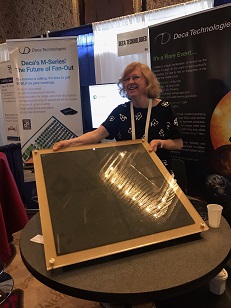 Progress in equipment and process methods were also described. Atotech described improvements in electrolytic plating for panel FO-WLP. Semsysco presented its high-speed plating line for vertical glass panel fine-line plating that can be used in panel processing. Besi introduced its large panel size bonder with a reported speed of up to 7,000 units per hour and a local accuracy of 1µm.

MediaTek focused on the reliability of FO-WLP with an extremely large FO ratio package with low ball-density for ultra-short-range radar applications.

Wafer singulation remains the focus of research to improve the process to reduce stress and cracking, especially in advanced semiconductor nodes where ultra-low-k dielectrics are used. ASM Pacific discussed developments in wafer dicing. Disco Hi-Tech Europe and IMEC described the development of advanced dicing technologies for W2W and D2W bonding. STMicroelectronics provided insight into the use of plasma dicing integration schemes for scribe lane layout and the impact on die strength. Electro Scientific Industries described its ultrafast laser scribe method.

Laser bonding is gaining in popularity. JCET described drivers behind the increased attention on laser bonding in a discussion of chip-package interaction for a fine-pitch flip-chip package for a 7nm semiconductor node die. Pac Tech USA described its vertical laser-assisted bonding for advanced chip-packaging.

System-in-package (SiP) and antenna-in-package (AiP) solutions continue to receive a lot of attention, especially as the rollout of 5G continues. Intel described an ultra-large SiP and integrated mmW antenna array module for a 5G mmWave outdoor application. Glass substrates for mmWave applications are also seeing increased interest, and a presentation from AGC provided insight into the latest progress. ASE, Samsung and SPIL discussed AiP developments. EMI shielding is increasingly important, and a variety of methods are being introduced. Plating is one process in high volume today. Henkel introduced a compartmental EMI shielding material that is jet-dispensed.

Emerging technologies discussed at ECTC include wearable electronics. New developments in printed electronics and additive manufacturing are part of this especially fast-moving area. The lunch keynote by Dr. John A. Rogers, director for the Center for Bio-Integrated Electronics at Northwestern University, was particularly inspiring as he detailed developments in wireless monitoring using soft electronics and microfluidic systems for the skin in neonatal intensive care.

ECTC’s special preconference sessions were Transient Electronics: A Green Revolution for Packaging, Photonics on the Cutting-Edge of Technology Evolution, and Future Visions of Electronic Packaging. A lively discussion took place one evening on unleashing the power of diversity in our workforce. The evening panel session discussed sensors and packaging for autonomous driving. The next night’s session focused on IC packaging materials for next-generation smartphones.

Clearly the industry is entering a new era with the introduction of smart packaging, including heterogeneous integration. Cooperation among various parts of the industry, including design, manufacturing and test, is required to bring these new architectures to market. ECTC is providing the venue for collaboration. Next year’s ECTC should provide even greater opportunities for discussion. The Electronics Packaging Society (EPS) will hold ECTC May 26-29 in Lake Buena Vista, FL, near Orlando.

E. JAN VARDAMAN is president of TechSearch International (techsearchinc.com); This email address is being protected from spambots. You need JavaScript enabled to view it..