The US EMS Business Divide

A clear view of the US escapes Asian EMSs, to both sides’ detriment.

Americans in the late ’70s and ’80s may recall the ubiquitous The New Yorker cover-turned-poster. The sketch depicts the view of the world from the perspective of a resident in the Big Apple. It pokes fun at the sometimes well-deserved image of New Yorkers’ shortsighted or even ignorant view of the world. The nondescript view of anything west of the Hudson River, including a flash of China, Japan and Russia, is humorous, yet we know truth is sometimes told through satire. 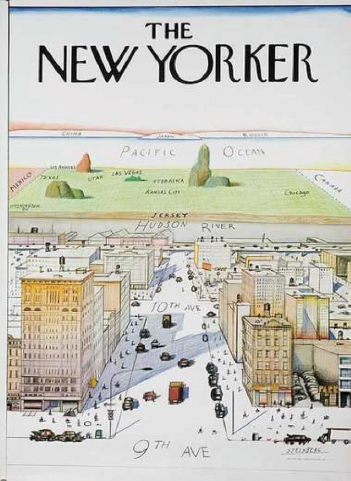 This same metaphor can be applied to Detroit’s automotive industry of the ’80s whose marketing planners were blindsided by Japanese automakers’ new standards in compact and fuel-efficient cars. Detroit’s view of the world was shaped from their own office windows.

I experienced similar shortsighted marketing when working with Singaporean government officials who claimed the world knew all about Singapore. Yet to this day executives in Singapore receive mail addressed to “Singapore, China.”

Today, we examine Asia’s view of the US as it applies to EMS. A generalized observation finds Asian manufacturers treat the US as a single large homogenous territory. In doing so, Asian companies fail to comprehend the differences of marketing and sales requirements between the Eastern and Western US. Just as the hypothetical New Yorker is blind to distant cities and countries, Asian manufacturers do not fully comprehend what challenges stand beyond the western states of the US.

For the purposes of this column, we are defining the Western US as California, Oregon and Washington. Eastern US is defined as the rest of the US.

Demographics. The Asian population on the West Coast, especially in the significant location of Silicon Valley, is much larger than that on the East Coast. The US Census Bureau lists the Asian population percentage (not including immigrants from India and the Indian-American population) reaching 25%. We find Asian immigrants and Asian-Americans exhibiting strong participation in all technical fields. This highly educated and skilled ethnic community is drawn to Silicon Valley and other high-tech areas such as Southern California. Thus, the Western US’s Asian population is a dominant force in electronics and impacts business decisions.
Given this makeup, the Western US region has a stronger pull toward Asian manufacturers, with its bond toward Asian culture, language, ideology and person-to-person contact.

Conversely, the Eastern US population has a much lower percentage of Asians, perhaps 7% maximum, with a corresponding lesser impact in electronics. This difference in geographical proximity leads many Asian companies to set up North American headquarters in California, making it more efficient to shuttle management, engineers and technicians to and from its Asian-based facilities. The Eastern US region is handled remotely, with no significant office or operation.

Travel time between Asia and the Western US is shorter, making travel less of a burden. The typical flight time from San Francisco to Hong Kong is 10.5 hr., while flight time between Eastern US cities and Hong Kong is 14.5 hr. direct and 2.5 hr. more for one-stop flights. As a result, Eastern US OEMs are less apt to initiate a visit to Asia to investigate or meet with potential Asian-based suppliers.

Marketing and sales coverage of the Western US is condensed and comprehensive, as more personnel and facilities are located on the West Coast. Eastern US marketing and sales coverage is typically conducted via long distance or, at best, a one-person satellite office. Thus, Asian manufacturers gather their marketing inputs mostly from Western US markets.

The time-zone difference with Asia is 15 hr. to the Western US and 12 hr. to the East. This works to the convenience of Western US workers. For example, a 15 hr. differential means overlapping work days: When it is 5 p.m. in California, it is 8 a.m. (the next day) in Hong Kong. During a one-hour window, 5 to 6 p.m. (Pacific), Western US companies can communicate directly to Asian companies from their offices, eliminating the need for making calls from home. This enables real-time group conferences, which are more effective than the potentially isolating effect of working as a single caller from home. For the Eastern US, direct communication from a US office to its Asian counterpart during work hours is impractical due to the 12 hr. time difference, resulting in no convenient overlap of work hours.

Current US business development conditions. The most quantifiable business condition is the dense grouping of Asian EMSs operating in the Western US. This concentration of EMS is fueled by the convenience of locality to Asia, lowest cost of travel to Asia and familiarities of Asian-American customers with local personnel. Such condensed sales activity creates an extremely competitive business environment, leading to many EMSs chasing the same customers. One of the effects of this condition is extreme price erosion in the Western US. With the focus on the Western US, marketing and sales work in the Eastern US is less planned and plagued by haphazard execution. In short, Asian EMSs are improperly scaling their efforts toward business development in the Eastern US region. Should a planned effort be launched in the Eastern US, Asian EMSs will discover less competition, numerous potential customers not previously known and a new breed of customer appreciating newfound exposure to the resources of Asia on a competent and informative level.

The successful Asian EMS must recognize the exacerbated Eastern US differences in travel distance, time zone differentials, language, culture and business ideology. One certain solution is to tailor East Coast marketing and sales efforts to customers’ profiles to open up fluent and seamless communications. It would be prudent to employ local Eastern US executives and engineers with the ability to communicate with the full range of customer personnel (management, technical, commercial, legal), investigate customers’ challenges/problems, formulate solutions and negotiate with those top level customer counterparts. A successful sales and marketing program creates a “buffer” between the Eastern US customer and the Asian EMS. The buffer function serves to reach negotiated understandings and agreements between the two – at times – adverse mindsets of business and cultural values. Such EMS employees will also increase the satisfaction and convenience of US customers working with Asian EMSs.

Focusing on the specifics of Eastern US needs will soon be necessary for Asian EMS companies as the revitalized Mexican EMS supply chain will be reactivated to promote itself in the US marketplace. This will come to pass within the next six to 12 months.

With a clearer view of the dynamics involving the US’s EMS business development, astute Asian EMSs can obtain a higher percent of market share by better understanding the subtleties of US’s “divide” between the Western and Eastern US. A more effective marketing and sales plan can be put to action, and the blind New Yorker retired for good.

Joseph Fama is a senior consultant for Technowise LLC, with 30 years in electronics and 25 years working directly for Singapore, China and US-based EMS and systems companies; This email address is being protected from spambots. You need JavaScript enabled to view it..