The overall CM market was sustained by the strong demand for servers and enterprise storage systems that are allowing the spread of cloud computing and social networking, NVR said in a press release. Capital spending in wireless infrastructure and enterprise LANs was driven by the building of the 5G wireless networks in many regions in 2019 by OEMs such as Huawei, Samsung and Nokia. Orders for tablets and desktop computers, once strong, are now expected to decline for the next five years in terms of unit and revenue growth. Notebook growth was still increasing and the computer industry as a whole (which includes servers and workstations) will see average growth. 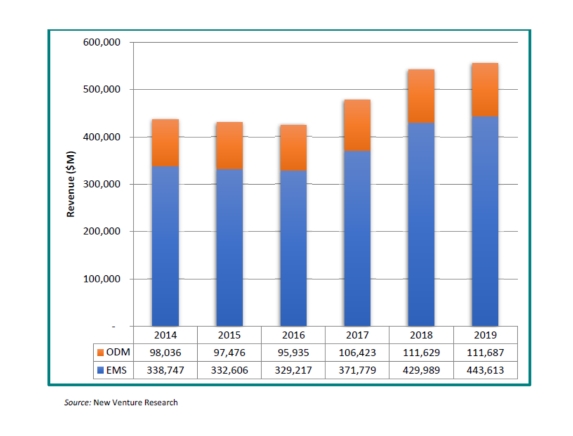 Some of the highest growth rates for electronics assembly products were found in the medical markets for things like ventilators, monitors and test equipment due to the coronavirus pandemic.

Still, NVR maintains, Covid‐19 has "dramatically affected" the contract manufacturing services market. Orders in the second and third quarters are . While the traditional segments (communications, computers, industrial and aerospace) have expanded in 2019, and should continue survive with moderate growth in 2020 and beyond, the transportation industry (automotive and commercial airlines) has been severely hurt as air travel and vehicle commuting has almost come to a halt and will take at least a year or more to fully recover (presuming an effective vaccine can be found). In addition, the retail sector will also be impacted as demand for consumer electronics (TVs, wearables, smart home devices) spending has deteriorated under fear of global recession. FIGURE 2 presents the total available market (TAM) for electronics assembly in 2019 by segment. 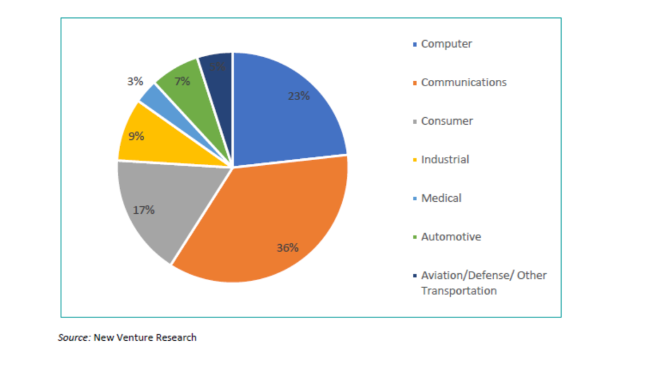 For the 10th year in a row, the CM industry was profitable, at $6.8 billion (for 34 EMS public companies and 17 ODM public companies), decreasing by $900 million from 2018. Foxconn accounted for more than half of all the earnings of the EMS industry in 2019, at $4.3 billion. ODM companies Delta Electronics ranked second in total earnings ($628 million), followed by Pegatron ($592 million) and Quanta Computer ($518 million).

Communications and computer products will continue to be the segments driving the largest growth in the electronics industry. In 2024, the total industry is expected to reach $1.4 trillion in annual assembly value (COGS), as consumption and replacement of electronic products continue Capex spending and new products fuel new demand. Outsourcing has become a critical element in keeping the electronics assembly industry expanding and driving costs to the margin each year — a leading factor in stimulating continuous consumer demand. The trend to move price‐sensitive manufacturing to low‐cost regions will impact the industry for all suppliers in the foreseeable future.

Outsourcing has become a critical element in keeping the electronics assembly industry expanding and driving costs down each year, and is a leading factor in stimulating consumer demand and technology deployment. The trend to move price‐sensitive manufacturing to low‐cost regions has ceased, but will continue to impact the industry for all suppliers in the foreseeable future — at least regionally, NVR said.