A summary of resistor material selection, evaluations and duplication of a complex digital design.

The concept behind embedded passives technology (EPT) is to fabricate and bury components such as resistors and capacitors (R&C) within the layers of a substrate during its fabrication.1 EPT drivers include demand for additional functionality at the same or lower price, better electrical performance, higher packaging density and technologies with potential cost savings. Using EPT, passive components may be embedded into the substrate directly under active devices such as ASICs. The shorter distance between the embedded passives and active components reduces parasitic losses associated with surface-mounted passives, resulting in better signal transmission and less crosstalk. Lower loss and lower noise yield an improvement in electrical signal performance, especially at high frequencies. Passive components account for 80 to 95% of the total number of components and cover over 40% of the surface of the PCB.

Reducing the number of surface mount passives will increase available real estate and therefore permit higher packaging densities. It has the potential to reduce material costs due to fewer purchased components and manufacturing materials (flux and solder), lower defect per million opportunities (DPMO), improve yield, and reduce production cycle time and time to market, as well as reduce cost of poor quality (COPQ). EPT can simplify assembly and test processes and reduce the actual cost, especially when using 0201 packages or lead-free processes. EPT reduces overall product cost in comparison with traditional use of discrete SMT components.

The Honeywell Advanced Manufacturing Engineering technology group has evaluated embedded passive technology as part of the Game Changers technology roadmap. The game changer of EPT was defined in three different phases. Phase 0, completed in 2009, defined the type of resistive materials available. Phase 1, completed in 2010, selected resistive material types, and designed, assembled and tested a test vehicle under the following conditions: ESD, non-ESD, IST coupon testing, thermal testing at -55° to 125°C and lifecycle and mechanical vibration and displacement test. Phase 2 is in the final phases of completion, where a high-complexity circuit card assembly (CCA) was selected using Thermount-based material for board fabrication with four layers of EPT (Ticer resist materials 25Ω and 1kΩ, and 3M C-Ply) embedded materials, in a 20-layer stackup with multiple impedance control layers.

Design and functionality. Customer demands for increased functionality for aerospace applications have resulted in high-density PCB designs that are low yield and high complexity, DfM violations, and significant hidden factory rework during assembly. EPT provides a means to reduce the number of surface-mounted components, thus increasing yields and freeing real estate (FIGURE 1). Although capacitors, resistors and inductors are all candidates for embedding, most current interests focus on capacitors and resistors since they represent the majority of passives used on a board. A generic single board is generally composed of 5% integrated circuits (ASICs), 4% connectors, 40% capacitors, 33% resistors and 18% miscellaneous parts.2 Embedded resistors and capacitors can be individually fabricated, and capacitors can also be manufactured in distributed planar form.

One concern about EPT is whether the technology is economically feasible. Advantages of EPT are the possibility to reduce assembly costs, negate the cost of purchasing and handling discrete passive components, and reduce required board size area. However, these advantages must be considered against the increased cost of board fabrication and decreases in throughput and yield of the board fabrication process.

ESD testing was conducted using two different lots: one with best-in-class ESD protection and the other without ESD protection. The ESD test concluded that there is no difference in resistance percentage change between the ESD and non-ESD (FIGURE 2) controlled boards during the assembly. 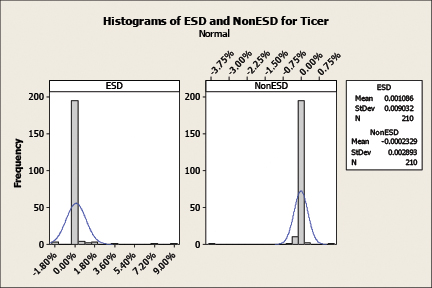 Figure 2. No difference between ESD and non ESD.

The final resistance tolerance is a function of the etch precision of the copper etch processes of the fabricator and resistivity variation of embedded film. To minimize the impact of etching on resistor tolerance, a fixed resistor width is recommended, with the resistor length adjusted to achieve the correct resistor value.

Another technique to improve resistor tolerance is to use larger dimensions since the line-width variation of the copper etch process is typically fixed and therefore independent of line-width. Designing with resistor widths and lengths greater than 0.25mm (0.010") is recommended. Consult the Honeywell AME resistor calculator model4 for determining recommended sizes based on tolerance and power dissipation.

Thermal and mechanical spacing allowances at plated-through and microvia holes can be challenging. A minimum of 0.25mm (0.010") is recommended for copper connection between the hole and the beginning of the resistor pattern. This ensures adequate isolation from the stresses caused by assembly soldering and hole drilling (FIGURE 3). 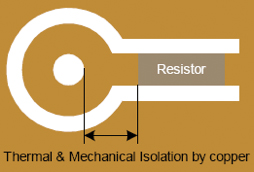 Design – resistor types. Designing for EPT resistor types can be determined based on the resistor value and electrical functionality. Two types of resistors can be used in embedded: resistors in very basic circuits, such as pull-up and pull-down, and precision resistors.

EPT precision resistors are characterized by a resistance value with a tolerance as low as 1%. To achieve the required precision tolerance of 1%, laser trimming method is applied.

Fabrication. Fabrication of PCBs with EPT involves the same processes as traditional fabrication, whereby embedded resistive materials are used as part of the stack-up structure. The NiCr resistor alloy reduces fabrication steps by eliminating the need for a separate resistive layer etch. NiCr can be etched first in cupric chloride, followed by ammoniacal etchant, the same etchant used to etch copper layers of the board. Also, use of double-treat copper can eliminate the need for laminate precleaners and oxide treatments. Board integrity is determined by traditional final testing, such as continuity, isolation and value measurements.

Several key fab processes (FIGURE 5) must be in control and possibly modified to ensure properly defined resistor patterns. These processes can be properly controlled, provided attention is paid to several considerations. Some considerations are the equipment setup for the photoresist application and subsequent exposure and development, and process control for selective copper removal to define resistor length, which can impact the value and tolerance. 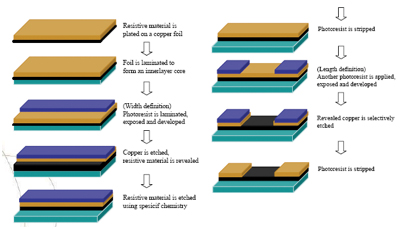 Laser trimming. Rules for the laser trimming5 process require that circuits be square or rectangular and consist of straight lines, arcs, or a combination thereof. The resistor “length” is always the dimension of the resistor in parallel to the current flow. And the resistor “square” in the corner area(s) of a bent style resistor, such as “L” shape or serpentine design, should be counted as one-half the value of the sheet resistance (FIGURE 6). This can be demonstrated in the following equation:
R = S*(Sum (Square)+Sum(Corner)/2)                  (Eq. 2)
where
R = resistance in ohms
S = sheet resistance in ohms/square
Square = number of squares
Corner = number of right corners 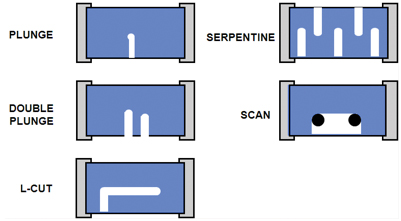 Based on design complexity, precision embedded resistors can be used and laser trimming is utilized. Laser trimming can achieve a tolerance of 1% utilizing several trimming methods, such as plunge, double plunge, L cut, serpentine and scan (FIGURE 7). Advantages and disadvantages of resistor trimming types are demonstrated in Table 3. 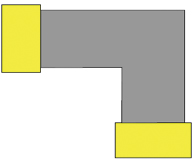 Top-hat (lobe type) configuration. The advantage of the top hat design is its wide trim range. FIGURE 10 shows a five square resistor. By trimming a single plunge cut of the laser, a nine square resistor can be created. The resistance can be manipulated between these values by limiting the amount of trim. Resistor with a trimmable range of more than three times the initial value can be created using this technique. This type of resistor must be trimmed, regardless of the tolerance requirement (FIGURE 11).

Tooling and trimming guidelines and requirements. Probe cards are required to measure all resistors as they are laser trimmed. It is best to design a probe card to measure 15 to 20 resistors at a time. Multiple cards would be required for designs that use more trimmed resistors. This will affect the circuit, tooling and setup pricing. Resistors with values of 50Ω or less require Kelvin-style, 4-point probing to ensure accuracy. The quantity of probe cards can be reduced by utilization of DfM modeling and determining the resistor’s unique values, shapes, and geometrical positioning.

The laser (Yag) spot is approximately 35-40µm diameter depending on the subject materials. This can be reduced to ~25µm with new optics. High accuracy trims (tolerance +/-0.5%) are best obtained for resistors larger than 0.020 x 0.020 in² (250 x 250µm) and are trimmable, depending on material and resistance values.

Some design considerations for precision resistors are: 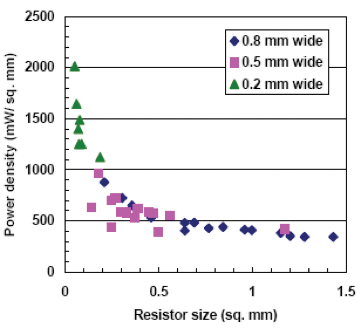 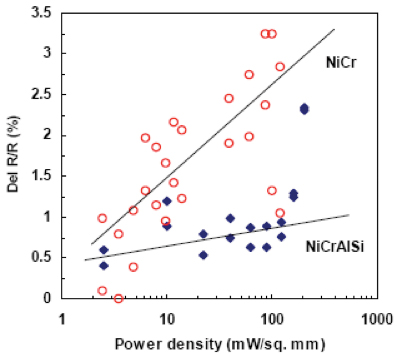 Figure 13. Resistance changes under power load, resistive foil was laminated on single side of FR-4 prepreg and the resistor size is 30 x 30 mil. 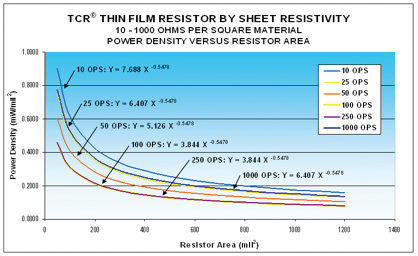 The following is an example using the Ticer Resistor Calculator to determine the size of the resistor based on the following parameters:

Solution. To achieve the 100Ω value, the design requires 4 square of the Ω.

The Ticer calculator provides guidelines to determine resistor size based on variables such as resistor value, power dissipation, tolerance and etch tolerance. It also provides resistor pattern shapes to optimize the footprint based on sheet resistivity. This calculator is located on the AME website.

Summary
Embedded passive technology is viable and has been reliably used in the defense and aerospace industry for over 20 years. EPT’s value is creating space on a crowded PCB where more active components are needed. Embedding resistors and capacitors can increase board functionality without increasing board size. It improves signal performance and reduces parasitics and crosstalk. EPT can increase reliability by eliminating surface mount devices and the defects associated with assembly processes such as placement and soldering.

Ed.: This paper was first published at SMTA International in October 2014 and is reprinted here with permission of the author.

Hikmat Chammas is AME Electronics Processing and Fabrication Technology Fellow at Honeywell Aerospace (honeywell.com); This email address is being protected from spambots. You need JavaScript enabled to view it..