The subtractive process (an etching process of copper foil) is the primary technology used to build various printed circuits.

On the other hand, printable electronics are making significant progress in this area, and several researchers predict the traditional etching processes will be replaced by printing technologies in the near future. The advantages are both technical and economical for manufacturers. Is this practical?

I currently use both technologies depending on the task at hand. The radar chart shown below compares technical capabilities between etching processes and printing processes. The etching process (red line) assumes typical photolithography and etching with flexible copper laminates. 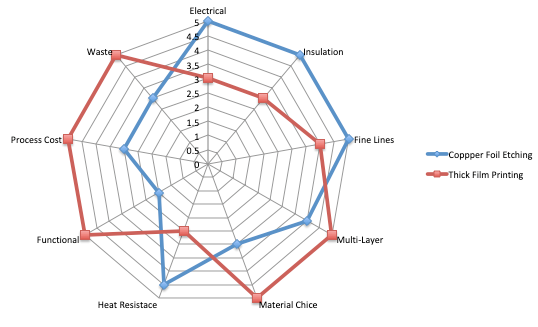 Because the red line and blue line show different patterns, they have different advantages and disadvantages. It’s not practical to compare all the bullet points for both technologies; instead we should consider whether the process is capable to build key parts at an acceptable cost.

Once we pass the cost test, we can determine if there are any critical issues with the technologies.

It is easy to determine which technology to employ since both have measurable performance at each milestone. Usually the conductivity for thick film circuits is two or three orders lower than copper etched circuits, so there is no argument against using copper foil circuits. Since silver ink conductors have migration issues, thick film circuits require special constructions to guarantee reliable insulation. Progress and innovation over the last 20 years alone has changed the process of generating fine lines with thick film circuits. Volume manufacturers can produce 50μm line and space on plastic films. Thick film circuits have the equivalent fine line capabilities as thin copper foil circuits. However, there is still a gap between reliably technology and process yields.

A thick film printing process can generate low cost via holes for double-sided circuits and multilayer circuits. This could be an alternative process for additional layers.

Traditional etching processes require an appropriate flexible copper clad laminate as the starting material. On the other hand, a thick film process is available for all kinds of plastic films, and elastic materials are available for wearable devices.

One advantage with the thick film process is the ability to create operative layers for functional devices such as flexible sensors, flexible photovoltaic cells, flexible batteries, flexible displays and more. This is achieved from a simple printing process assuming the appropriate inks are available. A traditional etching process has little to no capabilities for functional materials.

The actual designs for flexible devices coupled with the manufacturing processes are not simple. If you have the ability to use a traditional etching process, this is a safe bet. However, if the construction is not possible using the etching process, you should consider the thick film printing process with appropriate ink materials.

Feel free to contact DKN Research with any questions or comments.

5. Murata (Major device supplier in Japan had a open house event of the newly built battery manufacturing plant in Koriyama Plant. It will be the core facility of the new battery business.

7. TDK (Major device supplier in Japan) rolled out a new film capacitor series “B3277M” for the convertor of solar power generators. It has stable performances under severe circumstances.