Many new products related to thick-film base flexible circuits were introduced at the show.

Specifically, these products were screen-printed conductive inks featured by some Taiwanese companies as well as other mid-sized manufacturers. P-ban.com, an online circuit distributer, displayed several advanced technologies. Their basic concepts are not new, but their technology bundles are very practical, and are currently in the market.

Progress continues with reducing the density of thick-film flexible circuits. Flex circuit manufacturers have volume production with 50µm fine lines and spaces, and soon will be giving way to 30µm lines and spaces or less. Conductive ink suppliers and screen mask manufacturers claim that 10µm lines are possible, while double-sided and multilayer circuits with small via holes on flexible substrates are becoming mainstream. 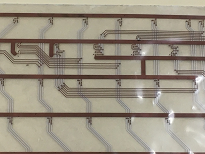 Another advantage from the thick film technology is the ability to generate conductive printed circuits on non-standard substrates such as polyimide films and PET films. The physical properties from traditional plastic films are adequate for electrical insulation materials. One disadvantage is the low moisture permeability from plastic films used with wearable devices. Everyday materials such as cloths and papers could be suitable for wearable devices; however, it is not easy to generate copper foil circuits if used as conductors. The thick-film circuit designed for two dimensional pressure sensor arrays is a good example. FIGURE 2 shows a wheelchair with a large sized sensor module built into a square fabric sheet. 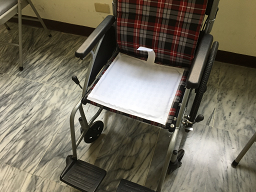 The manufacturer of the sensor device confirmed that all of the construction was created using a screen-printing process.

Au: This is part three of my observations from the JPCA Show. To be continued.

2. AIST (Major R&D organization in Japan) co-developed a new electrolyte for zinc/air secondary battery. It is capable to extend the life significantly.

3. Faurecia Clarion (Major car module manufacturer in Japan) has been developing new car audio systems with attractive interiors that reduce the size and weight to one-fifth.

8. Denso (Major automobile device manufacturer in Japan) agreed to build a JV with Toyota to develop semiconductor devices for automobiles. The new company will start operation in April 2020 with 500 employees.

10. Kyocera (Major electronics company in Japan) opened an R&D center in Minato-Mirai of Yokohama with 7800 sq. meter floor space to develop the technologies of IoT, AI, robotics and auto driving. A 200 sq. meter Creative Fab will be attached for trials and tests. 11. IMV (MEMS device manufacturer in Japan) unveiled a vibration sensor “VP-8021A” produced by MEMS process. It is less expensive compared to the traditional piezo type sensors.