But is what they are designing getting more complicated?

We’ve often discussed the growing need for young PCB designers to fill gaps in an industry where it seems more than half of its workers will retire in the next decade. That much is clear now, so instead of focusing on what is already well-known, we can instead point to an alternative gleaned from the 2018 designers’ salary survey: the technologies they are asked to design.

As for technology, while boards are often noted for their increasing density and smaller sizes, keeping layer count down appears to be a priority. More than half of the respondents to this year’s survey indicated they continue to design single-sided boards. And more than 80% are designing double-sided PCBs. At the same time, use of microvias/HDI is growing, as is RF/microwave circuitry. Perhaps surprisingly, only 16% indicated they use chip-scale packages. (Please note this survey is meant to be a snapshot, not a statistical be-all-end-all.)

We also added one new question to the latest survey: the percentage of time each week designers devote to actual design. For almost one-fifth of the respondents, board design is all they do. Another two-fifths spend more than three-quarters of their on-the-clock time at the CAD machine. Only 10% said board design takes up less than half of their business hours.

Job titles. Of the 165 respondents, the titles broke down as follows: 59% said they are senior PCB designers, 13% PCB designers, and 19% engineers. The remainder were PCB design managers or librarians (TABLE 1). 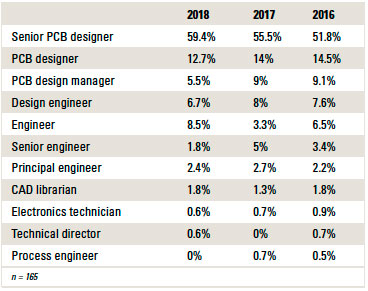 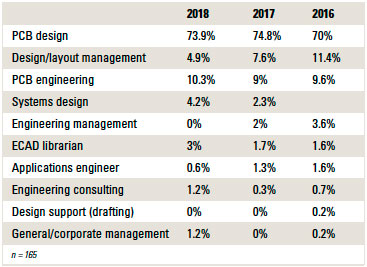 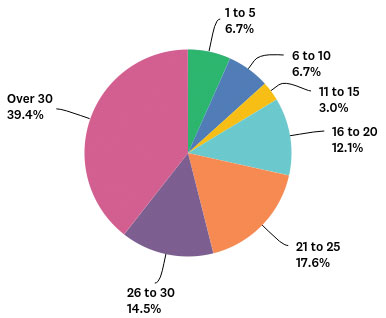 As with the previous survey, job satisfaction is high, with 89% of respondents offering a rating of 5 or more on a scale where 7 equals completely satisfied. Only 7% expressed dissatisfaction (ratings of 3, 2 or 1). 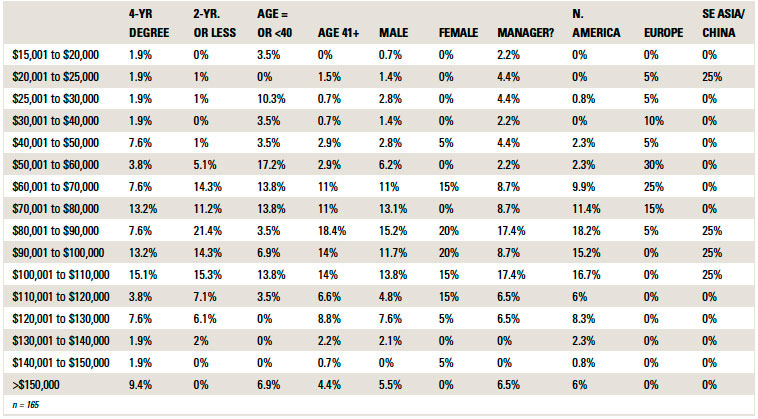 For the second year, designers were asked if they are at or above their company’s salary range for their job/position, with 57% saying “yes.”

Education and benefits. Respondents were asked about their companies’ educational opportunities and benefits. Some 60% said they have the opportunity for on-the-job training. Forty-nine percent of companies provide tuition reimbursement, and 47% support classes at conferences. Some 39% of respondents claim the ability to attend company-sponsored classes, and 38% of the firms have mentoring programs. About 16% of companies back college classes.

Once again, health insurance topped the list of benefits offered, with 86% of responses. Some 75% of respondents’ firms offer dental insurance. Other benefits include:

Education. The vast majority of respondents have some level of college experience – almost nine of 10 surveyed. Thirty percent of respondents have an associate’s degree, 27% have a bachelor’s in engineering or a related field, 7% have a master’s, and 25% attended college but did not graduate (TABLE 4). For those with degrees from four-year universities, two-thirds are in electrical engineering, and 12% in some other engineering field. 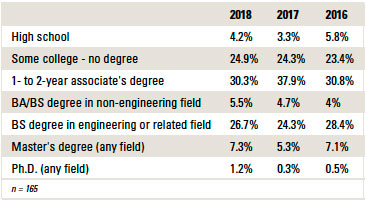 Certifications. In the 2018 survey, 37% of respondents said they are IPC certified designers. Of that segment, 55% are CID and 45% are CID+. 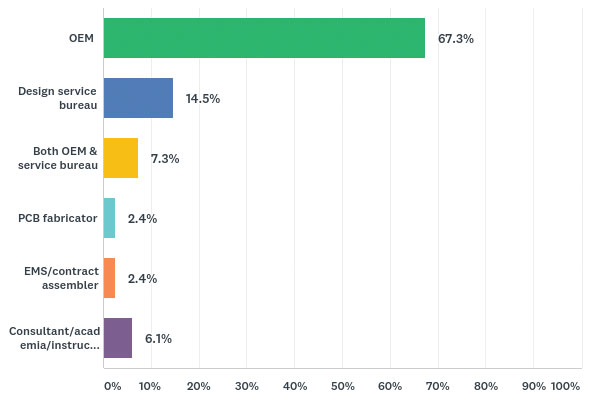 Designers said they primarily design for these end-markets: 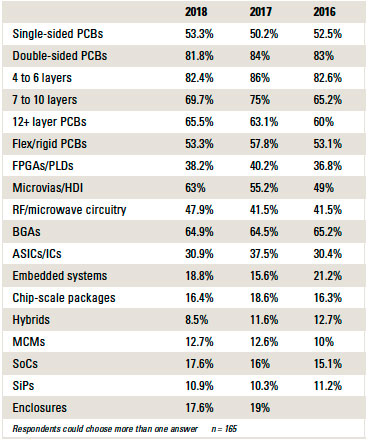 Challenges. Designers are more concerned about workload than keeping their jobs, as is evident when asked what their biggest challenges will be in 2019. They selected all that apply:

Software. On a weekly basis, Altium Designer tops the list of most utilized ECAD tools, according to the recent survey, with 32% of responses. Mentor Xpedition and Cadence Allegro were neck and neck with 30% of responses each, and Mentor Pads came in third, with 23%. Nineteen percent of designers said they use Cadence OrCAD on a weekly basis, making Mentor’s three platforms, including Mentor Board Station, the most used weekly software overall (57%), up from 50% in 2017.

When asked which ECAD tools designers use at least once a year, 32% said Altium Designer. The Mentor tools totaled 62%, led by Xpedition at 27%. Cadence tools made up 50%. Zuken tools combined for 7%. Autodesk Eagle was at 6%.

A correlation could be made between software used and respondents’ location. With most of the responses coming from the United States, that may have determined why Zuken products didn’t receive a higher percentage of responses, as Zuken is more popular outside the US, according to information provided at their annual user conferences.

To view the 2017 salary survey to compare with 2018 results, visit pcdandf.com/pcdesign/index.php/editorial/menu-features/11908-salary-survey-1708.

Chelsey Drysdale is senior editor of PCD&F/Circuits Assembly; This email address is being protected from spambots. You need JavaScript enabled to view it..