Inside, the unit has a USB connector for bootable flash key, and several switches, including Switch 1, which handles everything from resets, recovery, forced inputs and settings, and can override the startup passwords.

For electronic parts, resistors range as small as 01005. The RAM is 2Gb PC3-10600 DDR3 made by Samsung. There is a copper heat-spreader on the CPU. There are two Socket B (LGA 1366) sockets for the CPUs, and two Enterprise Voltage Regulator-Down (EVRD) regulators, which supply both the processor core voltage and L2 cache voltage. Other parts include a 16MB system uEFI BIOS ROM, a Maxim VSC452 Super baseboard management controller with integrated VGA controller, two HDM midplane connectors, one blade expansion connector, one CIOv daughter card connector, and one TPM 1.2 chip. 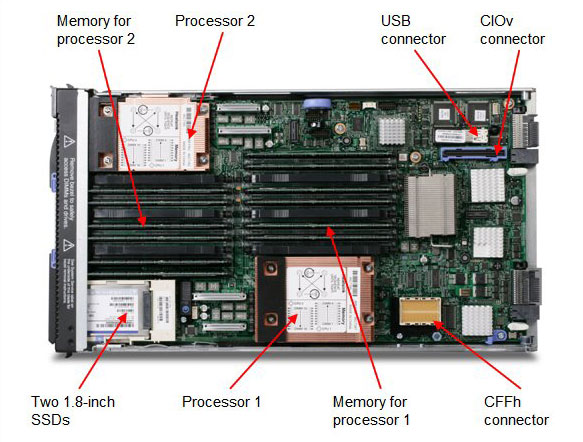