The 2014 ranking of the largest board fabricators reveals quiet but steady growth by domestic Chinese companies.

Among all the printed circuit board fabricators in 2014, the winners in terms of revenue gains were flexible circuit manufacturers that built for Apple iPhones, profits aside. They continue to do well in 2015, despite slowing growth of smartphone shipments. The losers were Korean flex manufacturers that served Samsung Electronics.

China became number one in terms of the number of entries in the 2014 NTI-100 list of the world’s largest fabricators, overtaking Taiwan and Japan. In terms of total output, Taiwan retained the top position and will continue to do so in years to come. In all, 99 printed circuit board manufacturers generated at least $100 million in revenue in calendar 2014.

2015 will see a different picture. The TTM-Viasystems merger, effective May 31, 2015, will push the new TTM higher in the rankings. With its purchase of Invotec, Amphenol will be on the list in 2015. Several Chinese makers are in the wings. We shall see.

Every year, data collection becomes more challenging, and this year was no exception, as many companies from China made the NTI-100. CPCA’s data are very helpful, but not without flaws. Although the author understands written Chinese, many Chinese makers have multiple PCB manufacturing locations under different names, which require intensive investigation. A few days, and sometimes several days of intensive investigation, were necessary to determine the revenue of a single fabricator. Despite this effort, the author is not completely satisfied with the results. However, a perfect list is impossible because so many factors influence the results. The final judgment is left to the readers.

As usual, this author is solely responsible for any errors  that may exist. Comments are highly appreciated. He wishes to thank PCB fabricators, the TPCA and CPCA for providing valuable assistance.

As in the past, several points should be observed in collecting data.

TABLE 1 shows the NTI-100 list. TABLE 2 is a summary of the contents in TABLE 3. Despite dwindling domestic production, the top Japanese fabricators registered 25.6% growth in 2014, largely by flex makers supplying to Apple, and mostly in their overseas growth. The four-time No. 1 fabricator, Nippon Mektron, produces 85% of its output overseas. Sumitomo Denko Printed Circuit produces more than 50% in China. Fujikura produces nearly 90% in Thailand and Vietnam. 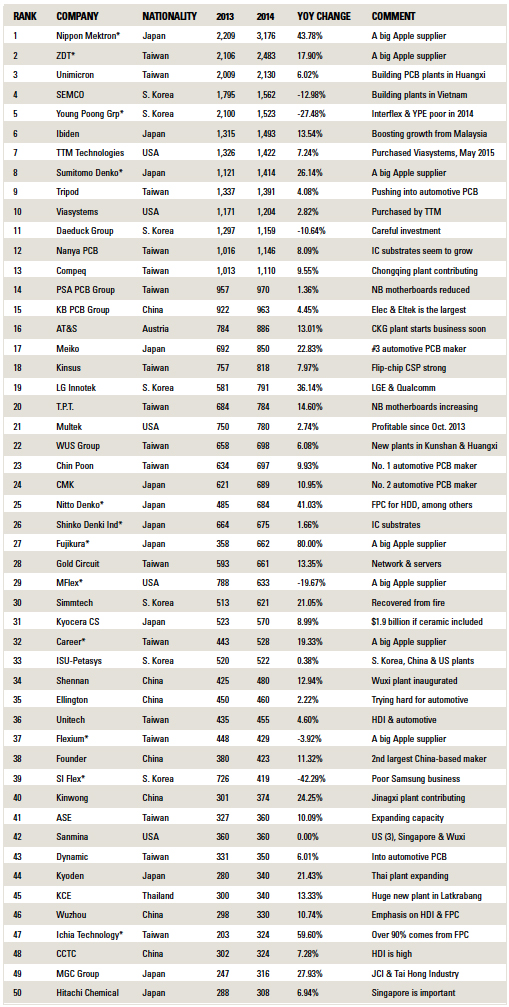 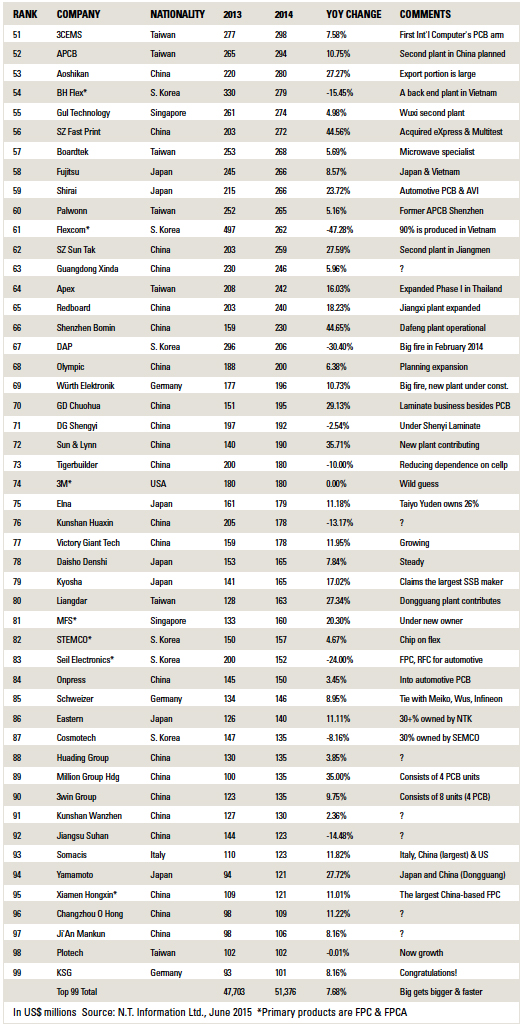 Table 2. Average Exchange Rates (vs. US$) 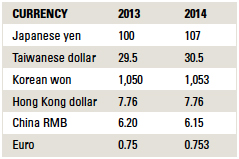 Taiwan’s production in China accounts for 57 to 58% of the total. A few percent is made in Thailand. Thus, its domestic production is approximately 40%.

The poor performance by most South Korean makers stems from reduced orders from Samsung in 2014. Flex companies in particular were hit hard. A couple of Korean flex makers are said to have defaulted on obligations. The 2015 situation seems to be improving, however.

In 2014, total world PCB production was an estimated $60 billion. Taiwan had a 31.3% share, followed by Japan at 22% and Korea at 14.6%. These percentages are in agreement with “Top Share” percentages (by country) shown. 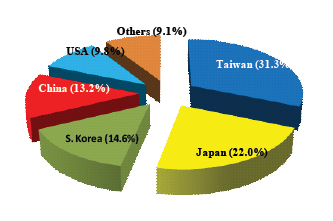 The author is quite positive that if we consider 240 makers (10% of the total), their production value accounts for 95% of the total production. The usual 20:80 rule does not apply when it comes to the PCB industry.

As mentioned, flex makers which supplied Apple with assembled FPC attained the largest gains, with one exception: MFlex. MFlex seemed to reduce its dependence on Apple. Nippon Mektron, Sumitomo Denko and Fujikura of Japan, Zhen Ding Technology, Flexium and Career of Taiwan are known to be major flex suppliers to Apple. Their growth is far above the aggregate 7.66% achieved by the NTI-100. 2015 will be a repeat of this pattern.

Nippon Mektron’s dependence on Apple has been very large the past few years. Apple orders have driven its growth. While still serving Apple well, the company seems to be making efforts to diversify. Nippon Mektron’s booth at the JPCA Show reflected these efforts. Nippon Mektron invested $195 million (at an exchange rate of 107 yen/USD) in fiscal 2014. It is expected to spend $220 million in the current fiscal year, a fairly large portion of which is said to be for domestic upgrades. Its 2015 output may reach $3.8 billion at 107 yen/USD, or $3.4 billion at 120 yen/USD. Most likely, Nippon Mektron will retain the No. 1 position in 2015.

SEMCO (Samsung Electro-Mechanic Co.), according to rumors, is expected to close its IC substrate operation at its Chochuwon plant and transfer production to Busan, South Korea, which may become the central part of SEMCO’s IC substrate operation. HDI microvia boards, including rigid-flex boards (more than 90% of rigid-flex boards have microvia structures), may be transferred to Kunshan, China, and a plant under construction in Vietnam. The author is making these comments on speculation. Take heed.

ZDT (Zhen Ding Technology) is probably the second largest flex supplier to Apple after Nippon Mektron. To cope with increasing orders from Apple for the next iPhone model using a force touch panel (iPhone 6S), ZDT and Flexium Technology are said to be investing large sums toward capacity expansion. Flexium is reported to be tripling its capacity in fiscal 2016.

Wus completed its move from the original Kunshan plant built in 1993 (the land was absorbed by the Kunshan government) to the new Qingsong plant, also in Kunshan, practically next door to Nanya PCB, along the centuries’ old canal which leads to Beijing. Wus Group has a plant in Kaoshiung, Taiwan, two in Kunshan (one old, one for automotive PCB), and a plant in Huangxi.

Young Poong Group consists of four PCB manufacturing subsidiaries: Korea Circuit, Terranix, Interflex, and Young Poong Electronics. Interflex and YPE had poor years in 2014. Korea Circuit and Terranix did not do too badly. Samsung Electronics is their major customer, as with most large makers in South Korea.

Ibiden had a problem securing orders from Apple for its new Malaysian plant. But it did secure new orders at the end of the year and did not do so badly with profits. Its flip-chip substrate business for MPU continues to be flat, or even down, because of poor performance in the PC sector and mounting price competition. However, the revenue decline from this sector was well compensated by strong growth for flip-chip CSPs for wireless devices. A $370 million investment in fiscal 2014 will boost Ibiden’s revenue, now that it seems to have secured orders from Apple in Malaysia. Investment in fiscal 2015 is forecast to be about $215 million. The total investment for PCBs by major Japanese fabricators in the current fiscal year is estimated to be about $1.2 billion to $1.3 billion, mostly for their overseas plants.

The hottest topic this year may be the merger of TTM Technologies and Viasystems Group. Through simple addition, the two companies’ revenue would have been nearly $2.63 billion, of which about $2.4 billion is estimated to be bare board sales. Given the large value of flex assembly of Nippon Mektron and ZDT, the “new” TTM would have been No. 1 in the world in bare board sales. TTM’s ascension from its modest start in 1996 to today is remarkable. In 2000, Sanmina was the world’s largest fabricator, with $1.55 billion in revenue, and Viasystems was second, at $1.25 billion.

PSA PCB Group (Passive System Alliance) consists of HannStar Board and GBM. (These two share the same chairman.) HannStar Board has a plant in Taiwan and six on the “Jiangyin Campus” north of Wuxi, China. GBM has four plants: GBM Chuangyi (Shenzhen), CMK-GBM (Dongguang), GBM Yuangmao (Kunshan) and GBM Chongqing Chuangyi (Chongqing). Approximately 70% of the combined revenue comes from the operations at HannStar Board.

KG PCB Group (Kingboard Chemical PCB) consists of Elec & Eltek (Kaiping, Guangzhou, Nanjing, Yangzhou and Ayutthaya, Thailand), Techwise (Huiyang and Foshan), Jiangmen Glory Faith (Jiangmen), Top Faith, Evertek (Kunshan) and Express Circuit (Changshu, Dongguang and Qingyuan). Over 50% of the revenue seems to be derived from Elec & Eltek. KB Chemical owns shares of a few other PCB makers in China, but they are not large enough to be consolidated.

AT&S continues to do well. Its Shanghai HDI microvia plant contributed 55% of the revenue. The new Chongqing plant has been undergoing qualification and is expected to start delivering IC substrates in early 2016. Revenue of $1 billion is probably within reach.

Meiko had good growth in revenue, but not in profit due to higher costs of manufacturing, and its Vietnam contribution was small compared to that from Chinese plants. Meiko this year is expanding the Vietnam operation (a part of the problem was a fire in 2013) and maximizing efforts to reduce manufacturing cost at all plants.

We have been hearing about steep wage hikes, labor shortages, tougher environmental regulations and other adverse conditions for manufacturing in China the past several years. Despite this, PCB investment in China is still strong. In 2013-14, it is estimated capacity for double-sided and multilayer boards rose about 3.5% in China. That may sound small, but consider 3.5% of the estimated 200 million m2 (China’s current capacity) is 7 million m2, or nearly 600,000 m2 per month! And expansion is still taking place. We may wonder where the market is for all this.

Expansion in China comes half from Taiwanese transplants and half from Chinese makers: Compeq (Chongqing), GBM (Chongqing), Unimicron (Huangxi), Wus (Kunshan and Huangxi), ZDT (Shenzhen, Huaian, Yinkou and Qinghuandao), Palwon (Suzhou), TPT (Chengdu and Wuxi), and Tripod (Xiantao), to name a few from Taiwan. APCB is looking for land near Kunshan for a second plant. Unitech purchased land in Nantong. (Certainly there’s more the author is unaware of.)

Chinese makers are not dormant. Shennan Circuit (SCC) built a large plant consisting of four buildings in Wuxi, one of which is for IC substrates (inaugurated recently). Shenzhen Suntak built the first large building on its Jiangmen campus and started on a second. (Altogether there will be three buildings.) Olympic is planning a fourth building across from its existing plant in Heshan. Shenzhen Fast Print built a huge plant in Yixing, south of Wuxi. SZ Fast Print purchased eXeption Circuits in UK and Multitest, the former Harbor Electronics, in San Jose. Shenzhen Bomin Electronics built a large plant in Dafeng, north of Suzhou. Kinwong is growing rapidly after building a large plant in Jiangxi. Redboard expanded its Jiangxi plant. KDS of Beijing built a new plant in Wuhan. These are the tip of the iceberg.

India and Brazil have been on the lips of PCB fabricators, but to the knowledge of the author no substantial foreign investment has been made. Southeast Asia is definitely the next place after China, but the combined investments in Southeast Asia are peanuts compared to those in China. PCB plants in China are now being automated to cope with rising wages and labor shortages. The author has seen many robots used to auto-load plating racks and AOI. AVI is replacing operators. Whether one likes it or not, China will dominate PCB manufacturing for the foreseeable future.

FIGURE 2 is interesting. Taiwan’s output in China continues to increase, but its share is decreasing, albeit by a small percentage. Several years ago, the author predicted Taiwan’s share in China would exceed 50%. He was not aware of the quietly growing domestic Chinese manufacturers. The technology level of some Chinese makers is on par with Taiwan, Japan and the West. 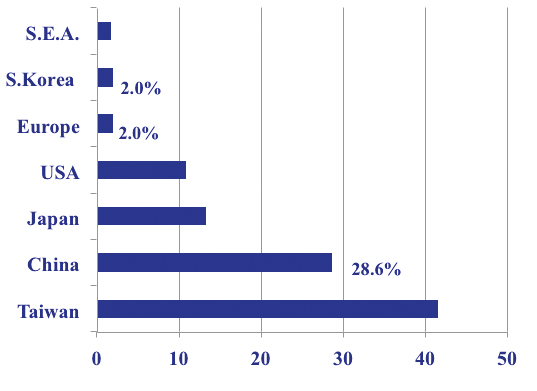 Incidentally, readers may wonder about Million Group Holdings (#89), 3Win Group (#90) and Ji’An Mankun (#97). The author had no knowledge of these. He learned about them by accident.

3Win Group (統贏科技集団, Tong Yin Technology Group) consists of nearly half a dozen subsidiaries. Judging from the names of subsidiaries spelled in Chinese, there seem to be four or five PCB plants. The author once passed by its FPC plant (Tongyin Flex Circuit Board, 统赢软性电路) in Doumen, Zhuhai, located between the Longshan plant of Mektec Zhuhai and Founder Technology. Other divisions listed are Shenzhen Tongyin Industry (深圳统赢实业), Shenzhen Tongxin Circuit Electronics (深圳统信电路电子), Zhuhai Tongyin Electronics (珠海统顺电子), Jiangsu Tongxin Electronics Technology (江苏统信电子科技), etc. The group appears to have a laminate plant as well in Jiangxi province.

There are many more such Chinese fabricators. Now you may understand why there are 1,200 PCB manfuacturers in China operating 1,600 factories. It will become more challenging every year to cope with Chinese fab shops.