Eliminating hydrogen peroxide enhances safety. But what will the traces look like?

Printed circuit board conductors (traces) are formed via etching in a complex process involving a copper surface. This process traditionally uses hydrogen peroxide (H2O2). Hydrogen peroxide is an unstable oxidizing agent, with a large process window that has the  potential for reoxidation. The chemical process of etching is difficult to control and does not meet the requirements for fine homogeneous structures. Furthermore, hydrogen peroxide is hazardous and increases the risk of fire.

An alternative technology uses ozone instead of hydrogen peroxide as an oxidizing agent. This technology involves a closed-loop (bypass) process installed into the production line. The amount of ozone produced is in the grams or even milligrams range. Excess ozone is converted and output as oxygen into the air. Because the amount of ozone used is miniscule, the volume is acceptable even under the most stringent international guidelines.

Conventional technology (e.g., phosphate esters) used for oxidation involves stabilized hydrogen peroxide. Regeneration of the etching solution is performed largely in the machine itself or in a central tank system. The applied etching solution must be renewed by the spray. An exchange in the diffusion layer becomes increasingly problematic for finer structures.

The nonuniformity of the solution itself, coupled with electrolyte replacement in the diffusion layer, tends to produce an undesirable undercut. This etching is such that, for the finest structures, the minimum photoresist does not provide a sufficient etch channel.

The novel technology completely substitutes ozone for hydrogen peroxide. This eliminates storage and handling of a dangerous substance. Ozone obtained from the ambient air is introduced through an injector and the novel reactor in situ in the process. Etchant is sprayed on the panel via patented pulse stream nozzles. The mixture is separately introduced. The regenerated CuCl is already in the diffusion layer of the etch channel. The etching process on the whole operates about 30% faster. Etching is drastically minimized, resulting in steeper sidewalls and finer structures (<20µm). The uniform concentration of the solution and the (patented) pulsating pulse stream nozzles aid the consistency and quality of traces on the entire panel.

Other results noted are the smoother surface structure of the interconnects and exact edge profiles along the trace (Figure 1). This leads to a considerable increase in impedance.

[Ed.: To enlarge the figure, right-click on it, then click View Image, then left-click on the figure.] 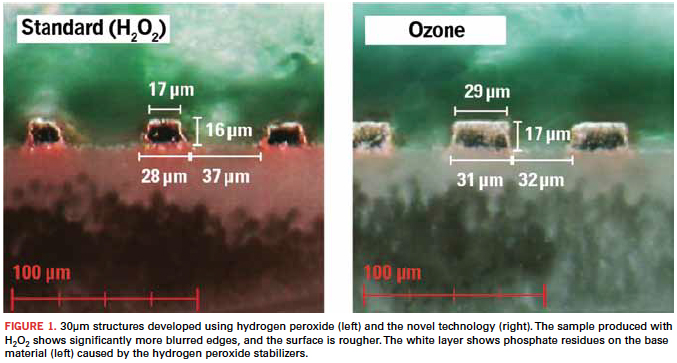 The novel ozone technology also narrows the process window by up to two-thirds compared to conventional hydrogen peroxide (Figure 2). 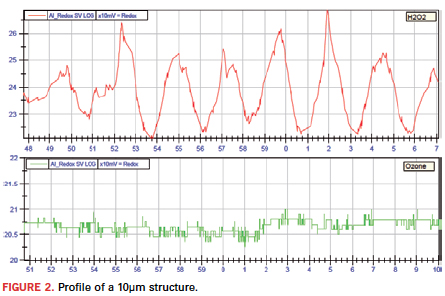 Marcus Lang is technical director and CTO of AKON GmbH; This email address is being protected from spambots. You need JavaScript enabled to view it..