Holistic product development – physical and virtual – was the topic of the day.

Users group meetings I’ve attended over the past two decades tend to come in two types. There’s the raise-the-roof kind, which tend to be loud and raucous, inward-focused (and occasionally self-congratulatory). Don’t get me wrong. They are fun, although often as much hype as substance.

Then there’s the kind that are lower-key, with the focus on opening attendees to new ideas that often go beyond what the host company’s tools can do for them.

Zuken Innovation World tends to fall in the latter category. ZIW USA returned to the East Coast this year after several seasons in Southern California. The three-day event in April was attended by 180 persons, including Zuken staff. The industry designers and engineers present represented a mix of PCB and wire harness backgrounds.

Of the Big 4 PCB CAD companies, Zuken has traditionally been the quietest. Still waters run deep. Its customer base includes most if not all the major defense contractors, plus a host of other blue-chip companies, some of which spoke at this year’s conference. And it is the only one of the four to introduce a CAD platform developed from scratch in the current century.

The conference was a mix of combined sessions and breakout sessions. The breakouts were loosely for PCB and wire harness, respectively, although there were some related engineering presentations on subjects like digital engineering.

Zuken USA president Kent McLeroth kicked off the week by predicting greater adoption of model-based systems engineering. He laid out a world where products in the field can send feedback to engineering working on a digital twin. The system in use would report back to the program manager or the greater supply chain with real-time data. Then work instructions could be sent back to the factory based on updated models. Digital engineering, he said, advances the course of 3-D design, using fully detailed models based on systems, electrical and electronics engineering.

“From a systems engineering perspective, missions are increasing in complexity,” McLeroth said. “Problems we are trying to solve are getting harder, and the problems are changing as we are trying to solve them. Systems design engineering comes from pieces, versus from architecture, so the systems are brittle and hard to test. Knowledge and investment are lost at lifecycle phase boundaries, increasing development cost.”

Employment of “digital threads” was the keynote topic. Digital thread refers not to a type of virtual clothing but rather to a communication framework, one that establishes a connected flow of data and the ability to view the relevant data of a project by any segment of the design, engineering and development chain.

In his keynote, Stephen Collins, CEO of Anark, a systems engineering company, quoted a study by the Harvard Business Review. He noted 52% of the Fortune 500 companies from 2002 no longer exist. His lessons: “Always be changing, and “be digital or die.”

Easier said than done. Not surprising, legacy systems make up a major hurdle when it comes to adopting new digitalization practices. CIOs spent much of their tech budgets keeping alive those old systems, Collin said, leaving only about 10% of IT budgets for new innovative technologies. Compounding the matter are the myriad flavors of data types. Also, corporate mergers result in multiple types of data systems and ERP or MRP platforms. Collins also noted companies need to archive reams of data for years. Yet, the public cloud has been slow to adapt because of IP concerns.

At the user level, Mike Oswald said Continental uses a combination of cloud-based networking and virtualization tools from Citrix, plus Zuken CR-5000 and CR-8000, for concurrent engineering and collaboration. The auto electronics giant, which has 516 PCB designers and design engineers in 17 countries, can reduce cycle time, spread work across designers, and divide responsibilities based on experience. Place and route are performed concurrently, even across multiple countries, then a single designer performs any final checks.

Matt Wuensch of Anark spoke on the Anark Core digital twin. The digital twin takes derivative design info and publishes it, with value-added inputs from other user segments such as sales, sourcing and manufacturing. The Anark Core Workstation platforms merge the mechanical and electrical functions. They can be used for work instructions to show (via animation) how a complete system is put together, for instance, a PCB set into system, then screws inserted, and so on. Think a 3-D pdf showing all the steps. The platform accepts STEP and IPC-2581 files and interacts with BoM and parts lists.

Steve Pytel, Ph.D., Ansys, also talked about the digital twin, in this case, the Ansys Twin Builder. This tool takes real-time live data and sends them back to the OEM. The OEM can correct the digital twin, then fix the real version. It’s almost like virtual reality. For example, a company could perform predictive maintenance using VR goggles. Based on a video he showed, a 3-D computational fluid dynamics simulation could supplant the hours to weeks it would otherwise take to get real-time feedback from the field, saving millions in warranties, operations, new business models and NPI.

Miller heads the Zuken product development team in charge of the AI-based tools. Machine learning-based programs, he noted, excel at pattern recognition and converting data into usable forms. (Think the Android speech-to-text tools.) But there are constraints. Machine learning algorithms are written to look for shapes, fields and textures, but can be fooled. Miller demonstrated this by adding a new texture to a car, which AI then confused with a cat.

AI-based CAD must be taught what “good” or “bad” design is. This can take many forms, such as constraint testing or internal analysis (e.g., is a component in a strange place?) or simulation (does the transmission line work?). Miller suggested a developer could “feed” the system with known good designs, then use the results to improve the algorithms. 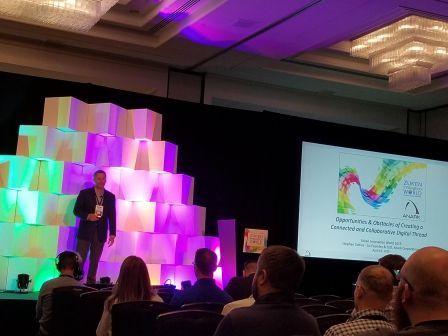 Tied in Stephen Collins of Anark expains the coming revolution known as the digital thread.

Despite the quirks, Zuken is pushing hard into this new arena. The Zuken team is attacking the problem on multiple levels, Miller said. This extends from bus/sub-bus planning all the way down to individual nets. Zuken expects to have a demo tool capable of cluster routing or multi-signal quick-routing within the year. Other gains may be coming in design planning and placement, trace ordering, and control of the autorouter.

Down the road, Miller expects the ML-based technology to be able to make recommendations on components and package styles. Zuken has begun working on fan-out and escapes from high-pin-count devices. The tool would in theory be able to determine when a part won’t work or meet the intended requirements and recommend an alternative.

Interestingly, Miller believes the end-result will be “far better” than an autorouter. “It’s different than a traditional autorouter because it can learn styles and develop something that’s much more human-like. Results can be tuned based on user style and feedback,” he told PCD&F.

Zuken took advantage of the event to announce a few product updates. Version 2019.0 of its top-of-the-line CR-8000 ECAD features improved schematic design usability, including the availability of constraint settings. Custom files and tables can be shared in Constraint Manager. Also, it features more detailed front-end models on signal propagation, and routing improvements to eliminate solder traps. 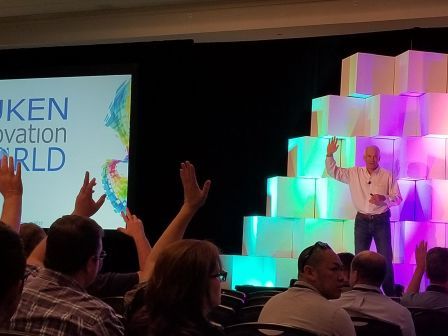 As part of the event, 14 “partners” (vendors) exhibited, including DownStream Technologies, Nano Dimension, Polar Instruments, Anark and others. Their presence added depth and context to the Zuken ECAD offerings.

For more about some of these subjects, listen to the PCB Chat podcasts from ZIW. They include Simon Fried of Nano Dimension on developments in the printed electronics space; Zuken's Miller, on the AI-based router; and McLeroth. These are available at pcbchat.com.