Most every electrical engineer working with high-speed differential interfaces such as PCIe is aware of the effect of rough copper on insertion loss – and knows it is to be avoided. What they may not understand is exactly why that’s true. There is a common explanation that seems intuitively correct but isn’t, that the current follows the longer contour of the copper, and the longer travel distance is responsible for the increased loss when using rough copper. To understand what’s actually happening, we have to move from a “circuit” model of signal propagation to a “fields” model.

Modern high-frequency signals are at microwave frequencies, forcing even digital designers to understand different fundamental physics than we’re familiar with.
We are used to a “circuit” model of signaling, where current leaves the signal pin of the transmitter and returns via the ground pin of that transmitter, making a loop through the PCB and receiver, completing the circuit. In the “fields” model that we have to get comfortable with at higher frequencies, however, the transmitter sets up electric fields between the signal and ground pins, and the energy in those fields is guided by the package, PCB, and connector features (such as pins, traces, and vias) to the receiver. The “fields” model better explains the effects of vias, return path transitions, and attenuation of the signals due to dielectric and copper losses. Why does rough copper absorb more energy than smooth copper? In short, it isn’t because the “current” travels farther (as in the “circuit” model); it’s because the electromagnetic energy is exposed to more copper surface.

A “circuit” model explanation of why rough copper absorbs more energy than smooth copper as a signal propagates from transmitter to receiver focuses on the “current” traveling a longer path due to the rough copper. For instance, in FIGURE 1, it’s intuitively clear the current travels a shorter distance on the surface of smooth copper than rough copper; thus it loses less energy (assuming the notion of “skin depth” forcing “current to flow on the surface of conductors” has been explained elsewhere). 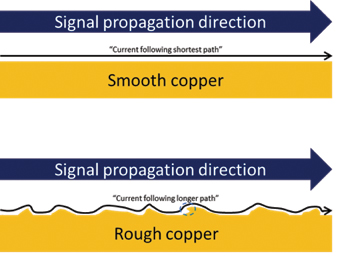 There are some problems with this intuitive explanation, however. If it were accurate, the signal would be delayed in rough copper proportionally to its lost energy.
Measuring the propagation delay of signals on rough and smooth copper doesn’t support that; their propagation delays are very similar. Also, note in the area circled that the rough copper may not be continuous from left to right. What happens here? Does the current loop back? We have to use the “fields” model to better understand what is really happening.

In the “fields” model, the signal propagates from left to right as an electromagnetic wave in the dielectric, inducing current density waves in conductors subjected to those waves (both signal and “ground,” or any other adjacent conductor). For instance, in FIGURE 2, we have a simple step source generating a fast rising edge voltage on a signal trace (*A). At the instant it’s applied to the trace, that changing voltage generates a positive-going charge on the “signal” (*B) and a changing electric field (“e-field”) between the signal and “ground” (*C).

As the signal propagates in the dielectric, electric charge density changes on the surface of the conductors (both signal and “ground”). Those waves of current charge density follow the signal, making it appear there is a current flowing from left to right in the conductor, and right to left in the “ground.” This is how it appears in the “fields” model. This model might seem awkward to comprehend at first, but it has a distinct advantage in explaining the effect of copper roughness. Rather than thinking of current flowing on the surface of the conductors, we can instead think about the effect of the electromagnetic field on those surfaces.

If the frequency is low, the induced eddy currents are small; not much energy is lost as the wave propagates, and that wave might extend through the entire thickness of the conductor. This is the case where the “skin depth” is greater than the conductor thickness. As the frequency increases, the skin depth becomes very small. At microwave frequencies the copper roughness is often greater than the skin depth. For instance, at 5GHz, the skin depth for copper is approximately 1µm,2 while standard 1oz. copper can have a roughness profile of 3µm.3 In the “circuit” model we would say the vast majority of the current is traveling on the rough surface. In our new “fields” model we picture the electromagnetic energy propagating slowly into the conductor, but only traveling a very short distance inside that conductor (1µm) before being absorbed by the conductor as eddy currents and heat.

FIGURE 4 demonstrates the two different models representing the same signal propagating from left to right, and its effect on a rough signal trace (conductor). We have replaced the circuit model of current traveling a longer distance on rough copper with a fields model of the electromagnetic energy impinging on a larger surface area as it propagates from left to right adjacent to a rough conductor. The fields model gives us some intuition that the increase in loss due to copper roughness is going to be proportional to the increased conductor area that the fields are subjected to. Unfortunately for us, the peel strength of the copper is also going to be proportional to that same area. Any effort to smooth the copper for better signal integrity will degrade the mechanical performance. Laminate suppliers will have to use chemical bonding means to retain peel strength (mechanical strength) while smoothing the copper for better signal integrity.

As a side note, the fields model can also be used to better understand the purpose of the conductive wrapper in “Hot Pockets” and other microwavable foods (some chicken pot pies, for instance). The wrapper quickly absorbs the microwave energy and heats the outer surface of the dough, browning it. They also may make use of the Curie temperature (then point at which some materials’ magnetic properties change dramatically) to limit the effect, but I’m not able to confirm that. Explaining the same effect using a circuit model would be extremely difficult.

The point is not to replace the circuit model of signal propagation with a fields model for every frequency, application, or problem. Rather, it is to augment the
circuit model with another that sometimes is more useful to understand the fundamental physics behind an issue. There are other cases where a fields model can enhance the intuition behind a problem (crosstalk and via impedance, for instance); it’s a good idea to understand it at microwave frequencies.

Ed.: This version contains text and illustrations not included in the original print version.

Jeff Loyer is signal and power integrity product manager at Altium (altium.com); This email address is being protected from spambots. You need JavaScript enabled to view it.. He spent more than 20 years as an engineer at Intel, the past 10 as signal integrity lead.